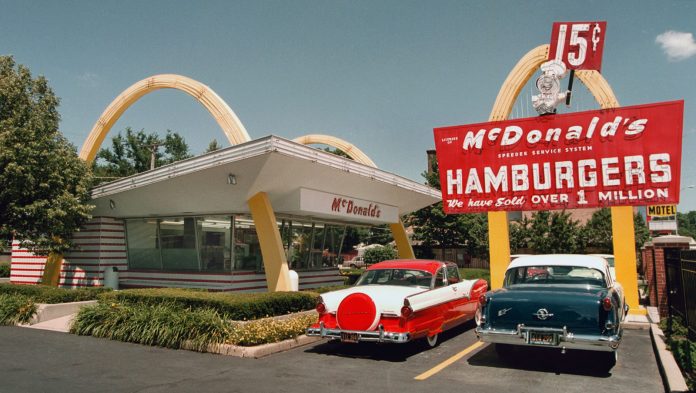 New Hampshire brothers Richard and Maurice McDonald opened the very first McDonald’s on May 15, 1940, in San Bernardino, California. Their tiny drive-in bore little resemblance to today’s ubiquitous “golden arches,” but it would eventually come to epitomize the fast-food industry, thanks to a pioneering system for food prep.

The first McDonalds started slow, but caught on fast

The first McDonalds—located at the corner of 14th and North E Streets, just off Route 66—started out serving up barbecue slow-cooked for hours in a pit stocked with hickory chips imported from Arkansas. With no indoor seating and just a handful of stools at its exterior counters, the establishment employed female carhops to serve most customers who pulled into its parking lot. The brothers’ business quickly caught on. Sales soon topped $200,000 a year.

After World War II, drive-in competition in San Bernardino grew, and the McDonald brothers discovered something surprising about their barbecue restaurant: 80 percent of their sales came from hamburgers. “The more we hammered away at the barbecue business, the more hamburgers we sold,” said Richard McDonald, according to John F. Love’s book McDonald’s: Behind the Arches.

McDonalds grew thanks to its ‘Speedee Service System’

The brothers closed their doors for three months and overhauled their business as a self-service restaurant where customers placed their orders at the windows. They fired their 20 carhops and ditched their silverware and plates for paper wrappings and cups so that they no longer needed a dishwasher. According to Love, they simplified their menu to just nine items—hamburgers, cheeseburgers, three soft drink flavors in one 12-ounce size, milk, coffee, potato chips and pie.

“Our whole concept was based on speed, lower prices and volume,” Richard McDonald said. Taking a cue from Henry Ford’s assembly-line production of automobiles, the McDonald brothers developed the “Speedee Service System” and mechanized the kitchen of their roadside burger shack. Each of its 12-person crew specialized in specific tasks, and much of the food was preassembled. This allowed McDonald’s to prepare its food quickly—and even ahead of the time—when an order was placed. All hamburgers were served with ketchup, mustard, onions and two pickles, and any customers who wanted food prepared their way would have to wait.

“You make a point of offering a choice and you’re dead,” Richard McDonald told The Chicago Tribune in 1985. “The speed’s gone.”

According to Love, the first customer at the newly reopened McDonald’s was a 9-year-old girl ordering a bag of hamburgers. The retooled restaurant struggled at first, though, and fired carhops heckled the brothers. Once McDonald’s replaced potato chips with french fries and introduced triple-thick milkshakes, however, the business began to take off with families and businessmen drawn by the cheap, 15-cent hamburgers and a low-cost menu.

With labor costs slashed and revenue growing to $350,000 a year by the early 1950s, the McDonald brothers saw their profits double. They had already established a handful of franchises in California and Arizona by the time a milkshake mixer salesman named Ray Kroc visited San Bernardino in 1954. Kroc couldn’t understand why the McDonalds could possibly need eight of his Multi-Mixers, capable of making 48 milkshakes at once, for just one location until he set eyes on the operation.

Seeing the potential in the business, the salesman quickly became the buyer. Kroc bought the rights to franchise the brothers’ restaurants across the country, and in 1955 he opened his first McDonald’s in Des Plaines, Illinois.

The relationship between Kroc and the McDonald brothers quickly grew very contentious as the aggressive salesman and the conservative Yankees had different philosophies about how to run their business. Kroc chafed at the requirement that he receive a registered letter from the McDonalds to make any changes to the retail concept—something the brothers were reluctant to grant. “It was almost as though they were hoping I would fail,” Kroc wrote in his 1977 autobiography, Grinding It Out.

Ray Kroc becomes the owner of the company

In 1961, Kroc purchased the company from the McDonald brothers for $2.7 million. While the name of the chain may have been McDonald’s, the face of the restaurants quickly became Kroc’s. Plaques with his likeness were mounted on the walls of many franchises with a description of how “his vision, persistence and leadership have guided McDonald’s from one location in Des Plaines, Illinois to the world’s community restaurant.”

The brothers who lent their name to the business and pioneered the fast-food concept faded to the background. After selling the business, the founders kept their original San Bernardino restaurant, to the annoyance of Kroc, which they renamed “Big M,” with the golden arches on the marquee sharpened to form a giant letter “M.” To gain his revenge, Kroc opened a McDonald’s around the block that eventually drove the brothers out of business.

The original McDonald’s was torn down in the 1970s and later replaced by a nondescript building that housed the San Bernardino Civic Light Opera. In 1998, it became the headquarters of a regional fast-food chain, Juan Pollo Chicken, which operates a small unofficial museum with McDonald’s artifacts inside.