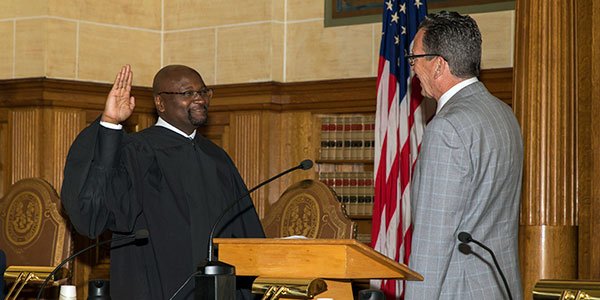 Richard A. Robinson born December 10, 1957 is an American lawyer and judge, who has served as Chief Justice of the Connecticut Supreme Court since 2018, and previously as an Associate Justice from 2013 to 2018.

In November 2017, the Chief Justice of Connecticut Chase T. Rogers announced that she would retire in February 2018. Governor Dannel Malloy nominated associate justice Andrew J. McDonald to be the next chief justice, but his nomination was rejected by the Connecticut State.

In April 2018, Governor Malloy nominated Robinson to be chief justice of Connecticut.

Born in Stamford Connecticut, Robinson received a Bachelor of Arts from the University of Connecticut in 1979 and a Juris Doctor from the West Virginia University College of Law in 1984. He was Staff Counsel for the City of Stamford Law Department from 1985 to 1988, when he became Assistant Corporation Counsel in Stamford.

Today in History: 20 Jan 2009 – Barack Obama Sworn in as 44th and First African American US President