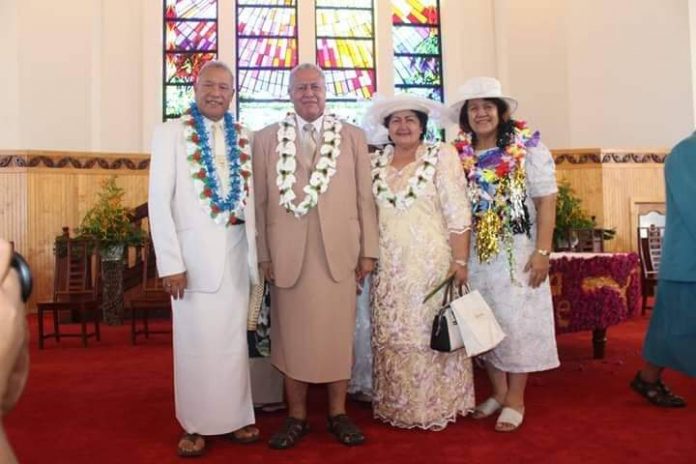 Eleven EFKS faifeau were declared pensioners (penisione) at a special service yesterday upon reaching the compulsory retirement age of 70.

Notable amongst the pensioners was Reverend Elder Lucky Slade who had graduated from Malua in 1973, and retires after 46 years of service.

Reverend Elder Slade acknowledged God as their source of strength throughout their years of service to the Church, and in leading the EFKS parish at Te Atatu peninsula in West Auckland, for 35 of those years.

Reflecting on their journey Reverend Slade said it was not an easy one, as they had started from humble beginnings.

When they were called to serve the EFKS Te Atatu in 1984, there were very few churches established in New Zealand, with only one matagaluega (geographical groupings of parishes).

Reverend Elder Slade recalled their first Christmas service at Te Atatu New Zealand, held in open air under a skyline of moon and stars because Te Atatu did not have a church building or a hall.

Reverand Elder Slade said that he and his wife Terri prayed and fasted, asking God to guide them as they establish the Church in Te Atatu.

Te Atatu EFKS had started by purchasing a block of land along the main peninsula; 472 Te Atatu Road. Over the years of development Te Atatu added a Church building, a hall, a pastor’s residence as well as a car park.

Despite the challenges they had faced, Reverend Elder Slade said that the most blessed part of the work is healing souls and helping people with their daily walk with God.

“Saving one soul for the Lord is the most blessed part of our journey,” he said.

“Throughout our Ministry, that was the main thing we thrived on, to fish for more souls for the Lord and his Ministry.

“We believe in the Aoga Faifeau as the first classroom for our youth, that is where they can be taught and molded into becoming good people;

“So we start with our young ones;

“And we as faifeau, we also have to listen to our youth,” said Reverend Slade.

Under the guidance of Lucky and Terri Slade, the EFKS Te Atatu Youth recorded a 12-song music CD “Fa’afetai le Atua” which won the Best Pacific Gospel Artist award at the 2018 NZ Pacific Music awards. The album was also nominated as a finalist for the Best Gospel artist at the Vodafone NZ Music Awards.

Asked what’s next, Reverend Elder Slade said that his time behind the pulpit may be over, however, they still feel that there are other ways to reach out to people in need.

As an example they have started a Ministry that reaches out to the homeless and the many people seen living underneath bridges across the city in Auckland.

“We are focusing on families now,” he said.

“My desire to serve and reach out to our people is still strong and that is why we came up with this mission.”

Reverend Elder Lucky Slade graduated in 1973 and served in the Church administration until he was appointed Director of Education for the Congregational Christian Church schools in 1980. He held this post until their call to serve in New Zealand in 1984.

Reverend Slade served on various committees throughout the years until 2011 when he was promoted to Toeaina; or head of the geographical district of parishes for their Pulega. Reverend Elder Slade retires as a member of the peak governing board of EFKS; the Komiti of Faifeau Toeaina Faatonu.

He married Terri Leutu Slade nee Sioa of Matautu, Saleilua and Sataua in October 1975. They moved to Te Atatu as members of the EFKS church in Vaivase-Tai and spiritual children of the late Reverend Vavae Toma.

Reverend Elder Lucky Slade is the grandson of Mavaega Slade FS, who had served as an EFKS faifeau for the Church in Afega.

As a retirement treat Reverend Elder Slade said he and Terri have made plans with some of their retired friends to take a 21 day cruise ship tour.

They will return to continue their work in the mission that has been started by his children.