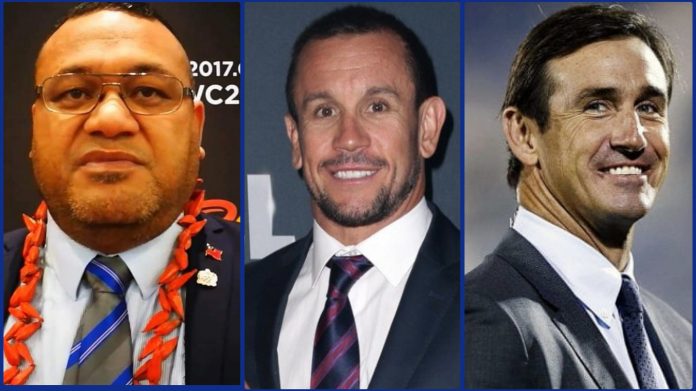 Rugby League Samoa President Tagaloa Faafouina Su’a has said reports about the Johns brothers being selected to coach the Toa Samoa this coming season are not true.

The UK Daily Mail, Australia’s Daily Telegraph and Fox Sports all released articles this past week that rugby league greats Andrew and Matthew Johns were due to make their international coaching debuts by taking charge of Samoa this season and in the Rugby League World Cup.

The articles mention that the current Toa Samoa Head Coach Matt Parish would step down to make way for the Johns.

Matt Parish has been coaching the Toa Samoa since 2013 including the last two Rugby League Word Cups. He took up the Head Coach role for the Toa Samoa after short stints as Assistant for the North Queensland Cowboys, NSW State of Origin team and the Many Sea Eagles.

Asked to confirm who would be coaching the Toa Samoa for the Rugby League World Cup set for England later this year, Tagaloa Fouina Su’ajj did not say.

“Sorry we are not in a position to respond to those media releases.. At the moment we are focusing on what needs to be done,” said Tagaloa.

The Rugby League World Cup was due to take place last year until it was postponed when Australia and New Zealand both withdrew due to safety concerns caused by Covid-19.

The tournament will finally kick off on October 15th where Samoa is scheduled to take on hosts England, in Newcastle.

Back in May last year, the John brothers Andrew and Matthew had publicly expressed an interest to coach Samoa.

On Fox League’s Sunday Night with Matty Johns, the younger of the premiership winning brothers revealed they would consider taking up the role suggesting Sonny Bill Williams would come into the mix.

“They’ve got a head coach at the moment there. But I spoke to Joey (Andrew) again about it today, and yeah (we are serious), definitely,” Matthew Johns had said at the time, adding they wouldn’t expect to be paid.

“We would do it for nothing. Quite seriously, and Joey is the same, we wouldn’t take a cent. Sonny wouldn’t..

“It would be a bit of three-way coaching. I don’t know how it would work, but in my opinion Samoa should be emulating what Tonga are doing.”

The now confirmed to be false news of the Johns’ involvement with Samoa comes after Andrew Johns was demoted from Nine Network’s commentary box, with his contract with the network due to expire at the end of the year.

The Newcastle legend was downgraded from the channel’s commentary team and has been reporting from the sidelines for the past several games.

Toa Samoa’s preparation for this year’s World Cup includes a test against the Kiwis on Saturday 25 June at Mount Smart Stadium in Auckland before taking on the Cook Island side in Sydney.

Samoa’s fixture against the Cook Islands is part of a three-game extravaganza, under the stand-alone State of Origin, that will relaunch international football for the first time since 2019.