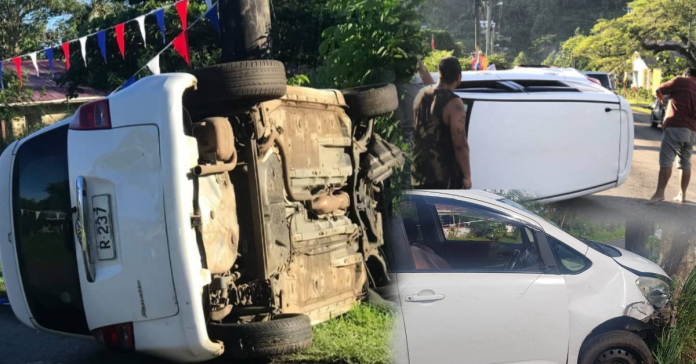 21 July 2019, Apia Samoa. Two men who crashed a rental vehicle into a tree stump on the side of the road at Sinamoga were seen by witnesses leaving in a taxi, taking with them their half-finished bottle of whiskey.

According to Faasalega Brown who lives in the house across the road from the scene of the accident, their household was woken by a loud bang at about 7am yesterday (Sunday) morning.

They saw two men come out of the vehicle unharmed. A taxi soon pulled up, in which the men left, taking their half-finished bottles of alcohol with them.

Faasaleleaga and her elderly mother Leva Tevaga Kuresa said one of the men looked to be 21 or 22, and the other was older, and looked to be in his 30s.

The women said that the vehicle looked to have swerved off the road and hit a tree stump on the side of the road. 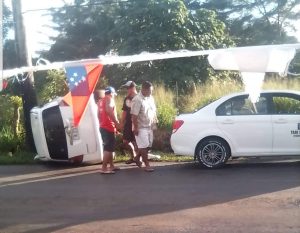 The vehicle was left on its side, partially on the road, until the staff of the rental company came by and turned it riight side up in preparation for towing.

Elderly grandmother Leva Kuresa said that she and her children and grandchildren had front row seats to the accident and the actions of the two men involved.

The police had come by and asked them questions.

Faasaleleaga and her Mom as well as the children who would jump in to share what they’d seen told Samoa Global News that the police had been twice.

“They only just left, the police returned with the two men who had driven in the car. Those two came back wirh the police.”

Staff of Millenia Rentals who had come to organise the towing and removal of the vehicle said that the car had only been rented out the day before.