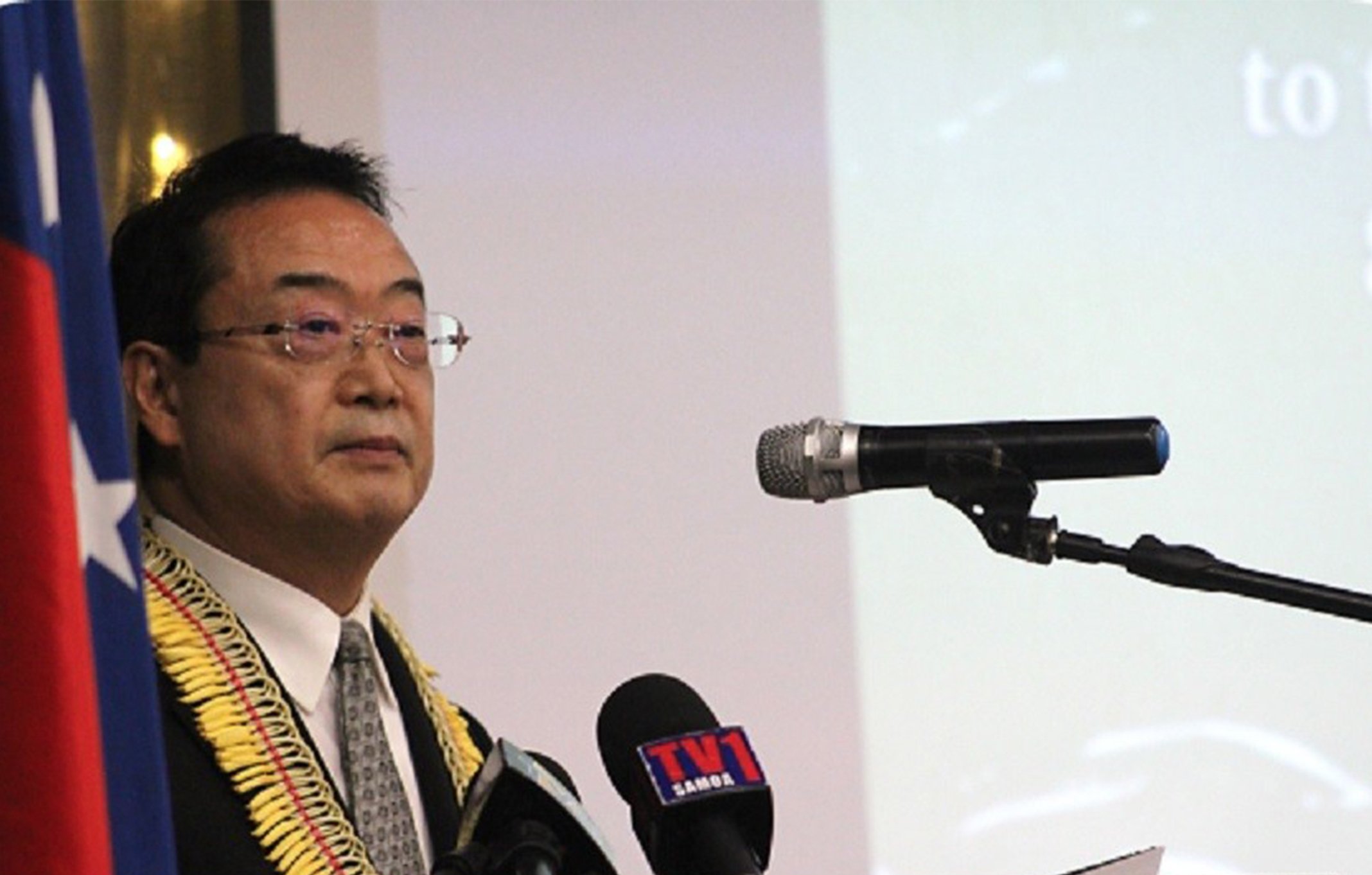 Honourable Members of the Parliament

Members of the Diplomatic Corps and International Organisations

It is a great honour for me to extend my sincere and warm welcome to you all here this evening to celebrate together the 85th birthday of His Majesty Emperor Akihito of Japan.

In fact, His Majesty’s birthday falls on the 23rd of December but since this date coincides with Christmas holidays, it was then decided that all Embassies abroad celebrate it in advance.

Emperor Akihito was enthroned in 1989 as the 125th Emperor of Japan. Unfortunately, due to his age and health that would make it difficult to fulfil his duties, Emperor Akihito will abdicate in April 2019.

His son the Crown Prince Naruhito will succeed his duties after the enthronement in May 2019.

This is our last year to celebrate Emperor Akihito’s birthday in November. Distinguished Guests, Ladies and Gentlemen, In May of this year, I had the privilege to receive the Hon. Prime Minister Tuilaepa Fatialofa Lupesoliai Sailele Malielegaoi on the occasions of the PALM 8 Summit and Official Visit.

The Official Visit is the highest invitation from the Government of Japan to which the first ever for the Hon. Prime Minister to attend.

Included in the seamless schedule of activities during the Official Visit, was the conferment of the “Grand Cordon of the Order of the Rising Sun” by His Majesty the Emperor to Hon. Prime Minister Tuilaepa, who has long 2 contributed 20 years of his service as Prime Minister to strengthening the relationship between Japan and Samoa. The Order of the Rising Sun is the highest Order in Japan.

The Official Visit was then rounded up as the Hon. Prime Minister and his Good Lady were audience to Their Majesties the Emperor and Empress and had stayed at the Akasaka Palace in Tokyo.

I must say, not every high level officials, business, sports and very famous people have had the prestigious opportunity to be audience with Their Majesties.

Such higher level official visit will definitely an epoch-making event for the ties of two countries.

Distinguished Guests, Ladies and Gentlemen, This year marks the 45 years of anniversary of Japan-Samoa diplomatic relations.

Our bilateral relations has been excellent so far, and continued to register successful results. Many of the projects over the years have been realized through JICA before the Embassy here in Samoa co-opens its doors under the Embassy of Japan in New Zealand in 2013 until last year – where we got separated from the Embassy in New Zealand and operated independently.

We wish to thank the team at JICA for their dedication in Samoa’s development these past decades such as cooperation in solid waste management, water sector development and power sector expansion, as well as training programs in Japan, dispatch of Japan Overseas Cooperation Volunteers and Grant Aid projects in various sectors including port development, shipping vessels and water supply. Japan is continuously committed to assist Samoa through its Grant Aid projects introduced and commenced in 1977 aimed at the contribution to promoting the economic and social development of Samoa. This programme have enabled the enhancement and safety criteria of several projects through various sectors but mainly for construction of economic infrastructure such as the airport, seaport and seawall. Among these projects some are worth mentioning, “The Project for the Construction of the Pacific Climate Change Centre” is expected to complete in June of next year.

This centre aims to enhance the operational capacity and improve the skills and expertise of those from other Pacific Island countries involved and are at the forefront of climate change by ensuring that the Pacific Climate Change Centre is a key research facility of SPREP in Samoa and ultimately to contribute to improving Samoa’s resilience against domestic and regional environment and climate change. “The Project for the Reconstruction of Vaisigano Bridge” is still under construction with its expected completion in June 2020.

This bridge plays a significant role that greatly facilitate physical 3 distribution and enhance the transportation network that comprises the Beach Road as well as improving the lives of the residents of nearby villages. In addition, we have a scheme called the Grant Assistance for Grassroots Human Security projects or GGP in short, started in 1991 to date, more than 170 projects have already been implemented for community development through reconstruction and extending of school buildings, support women activities, water systems and so on.

Apart from other countries I have been posted to- Thailand, the U.S, Singapore, and Australia, I find Samoa and her culture and traditions very similar to Japan, caused by the same connectivity of the ocean, its people and village system.

Similarly to, as Pacific Island Countries and Japan are surrounded and shared by the Pacific Ocean.

Last year in June, I have had the honour to receive the Matai title bestowment from Safotulafai in Savaii Island.

I am still determined and continued to learn the traditions and culture of Samoa and her people as much as possible.

I am confident that Japan’s cooperation with Samoa continues to grow and strengthen as we approach 2019 with the much anticipation of the Ceremony of the Enthronement of the new Emperor of Japan, the 2019 Rugby World Cup for the Manu Samoa to take part in and the Olympics and Paralympics Games, Tokyo 2020. May I now propose a toast with Japanese sake.

Those who have not had a glass of sake in hand, please taste it later on. Sake is provided in the corner of this room to the steady progress of the mutually-beneficial cooperation and friendly relations between Japan and Samoa and I would like to express my heartfelt wish for the happiness and long life of His Majesty Akihito not forgetting the happiness and further prosperity of the people of Samoa. Kampai!