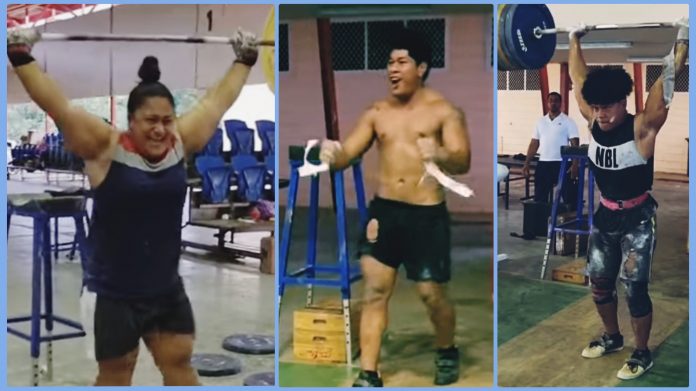 Feagaiga Stowers has taken out the Best Overall Female placing for the Oceania Online Cup held on Saturday, setting three new Oceania records. Feagaiga lifted 121kg in the snatch and 155kg in the clean and jerk to a total of 276kg, setting three new records for the region. Samoa’s Commonwealth Games gold medalist will defend her women’s over 90kg division title at the upcoming Birmingham games.

The Oceania Cup success is just the beginning for Samoa’s Weightlifting Team, who are now resetting and turning their focus to the Youth Championships, the Junior Championships, as well as the Pacific Mini Games, held online in June.

“Our team will be competing in all those tournaments, as part of their preparation to the Commonwealth Games in July,” said Tuaopepe.

Samoa’s national lockdown to curb the community spread of covid has little impact on Tuaopepe’s gold-medal, record-breaking weightlifting team, who have isolated themselves for several months now in an intense training camp at the High Performance Training Centre at Tuanaimato.

“It’s important to maintain the high level of intensity training, as they are currently undergoing,” Tuaopepe told Samoa Global News. “It’s not time to ease down yet. We will continue the heavy build-up until early June,” said the Championship coach.

“Our team has been in lockdown in training camp. So they are able to compete in the online competition. And they are also able to train on their own on a daily basis being isolated from the public”.

Tuaopepe says that the team is on the right path for the Commonwealth Games but still have a lot more work to do in order to be at their best form for the games in July.

“We must stay humble and pray to God to grant us the strength and good health over the next few months..”

It has long been known that Tuaopepe’s formula for success centres on hard work, commitment and a highly disciplined approach. “We train three times a day, 5am in the morning, 11am to 1pm and then again in the evening for a 5pm to 8pm session,” Tuaopepe told Samoa Global News in an earlier interview.

Tuaopepe acknowledged the support from sponsors and partners who have made it possible for the Samoa Weightlifting Team to continue their preparations for the upcoming Commonwealth Games.

“I acknowledge and would like to give a special thank you to the Government of Samoa, SASNOC, Samoa Paints & Pure Pacific Water, who have been the strong support behind the team during their preparations”.

Follow Samoa’s national weightlifting team on their Facebook page to see their trainings and competition from the High Performance Training Centre at Tuanaimato.