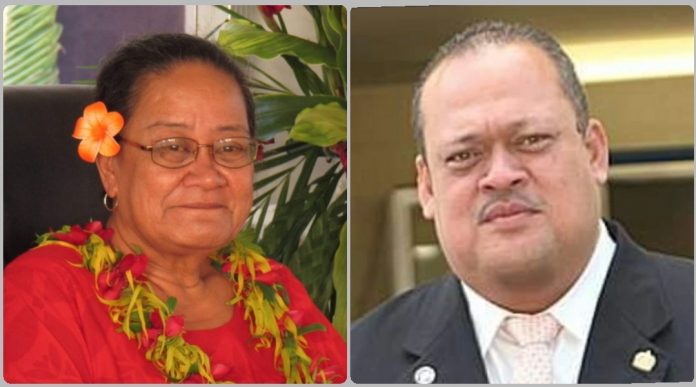 The President of Samoa’s Lands and Titles Court (LTC), its Vice President and Judges were notably absent from the special ava ceremony hosted by the Ministry of Justice and Court Administration (MJCA) on Wednesday afternoon, to officially welcome the new Minister and her Associate.

In response to questions from Samoa Global News, MJCA Chief Executive Officer Moliei Simi Vaai acknowledged the presence of the media and its extensive coverage of the welcoming ceremony, but adds that she has no knowledge of why the President and Judges of LTC were all absent from the ceremony.

“That’s a matter where the Chief Justice is the only one who can confirm the reasons behind it,” Moliei says.

Samoa Global News spoke with several workers of MJCA who say it is likely the LTC President and judges boycot the event because they did not support the new Minister.

“We were also surprised to see that they weren’t there.. if all of them chose to not turn up then it must be some sort of strike or protest..”

President Fepuleai Atilla Ropati was reinstated in 2019 by a conscience vote of Parliament after he resigned in April 2019 due to an incident where he assaulted a staff security during an end of the year Christmas party for the Ministry.

Twenty-one Members of Parliament voted against the reinstatement, while 18 voted in favour of Fepulea’i continuing as the President of LTC despite his criminal conviction. A two thirds majority was needed for the President to be removed.

Fepuleai was convicted and fined $7,000 tala that included $2,000 reparation costs towards the complainant.

The incident occurred in 2017 when Fepulea’i assaulted a Ministry security guard during a staff end-of-year party. Saili Leota sustained serious injuries when he was struck over the head twice by Fepuleai, using an empty beer bottle.

Justice Robert Fisher of the Appeals Court overturned the discharge without conviction.

Justice Fisher went on to say that the Judiciary should not be seen in the eyes of the public to be protecting one of their own.

After the Parliamentary vote of 21-18, Fepuleai was reinstated as President of LTC in July 2019.

Prime Minister Fiame Naomi Mataafa, who was Deputy Prime Minister at the time, had spoken out against the Parliamentary Committee Report that recommended Fepuleai should not be removed.

“I reject this report on the basis that it says: the criminal acts committed by the President were not done in relation to the performance of his work as a Judge;

“The question is, Mr Speaker, if the night watchman’s head had been struck and he had died..? Would this House of Parliament still want him to stay on?”

“Is this House of Parliament saying that judges are allowed to commit murder, rape, burglary and other crimes..?

“..because that judge did not commit the crime within the context of carrying out his duties as a judge?!”

Fiame at the time said the second reason for her strong objection is that the Committee’s report places the decision of a lower Court above what has been laid down by the Court of Appeal.

“As a Member of Parliament, I am shocked that a Parliamentary Committee would bring a decision of a lower Court as a basis of its decision, when the highest court, the Court of Appeal, has handed down a decision;

“Once the Court of Appeal hands down a decision, it disregards any and all decisions of the lower Courts..”

Fiame told the Legislative Assembly that if the House of Parliament takes decisions of lower Courts over the Court of Appeal, then they would be doing a great injustice to the peace and security of the nation.

Of the 18 MPs that voted for Fepuleai to return as President of LTC, 14 stood again to contest their seats at the April 2021 General Election. Of that 14, only two returned – Sulamanaia Fetaiai Tauiliili Tuivasa and Leaana Roni Posini. The third MP being Lealailepule Rimoni Aiafi whose seat was not contested.