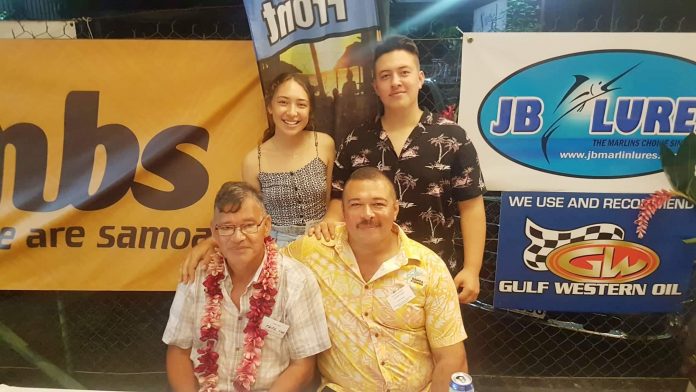 05 May 2019, Apia Samoa. Three generations of the Rasch family joined forces to compete together in last week’s International Game Fishing tournament, continuing a family tradition and a shared innate love for the sea.

Skipper Fritz Rasch III of the boat Taumafai and his crew made up of his Dad, Fritz Rasch II, and two of his children, Henrique (20) and Ellie (13) have so far competed in two deep sea fishing tournaments this year.

For Skipper Fritz Rasch, these tournaments are not only an opportunity to pursue a sport that he loves but also a chance to instil a deep sense of appreciation and love for the ocean, passed down since his grandfather’s time.

Having three generations on board the Taumafai is as unique and special as the significance of the boat’s name which is an ode to Rasch’s grandfather (Fritz Rasch I) who captained the historical family operated Taumafai ferry that used to service Samoa.

“I named my boat Taumafai after the Ferry that the Von Reiches’ used to own and operate. They used to ferry between Falefa and Apia and then Apia to Savaii. My grandfather, Fritz Rasch I, used to captain that boat”.

Rasch is of the view that the ocean is a pathway and a source of culture and connection; and says it is one of the reasons he returned to Samoa with his family in 2016.

Although game fishing is a newly introduced water sport in his family, water expeditions are a long time family practice which he intends to continue.

“This year has been great having my daughter and Dad join me for the Savaii Fishing tournament held last month and now this tournament with Dad and my son Henrique;

“It’s something I definitely want to continue instilling in them because it’s not just about fishing it’s also having water experiences and confidence in and on the water;

“Even being able to provide for the family, catching a fish and bringing it home to feed your family.”

Daughter Ellie, following in her father’s footsteps into the SIGFA tournament was also the youngest Angler in the womens’ tournament held last Wednesday, but not without first going through an angler’s rite of passage in discovering her sea legs.

“As long as I can remember – there was always fishing, said Ellie.

“I remember going boat shopping with dad. The first time I went out on the boat I got sea sick – I only just got my sea legs for the first time during the ladies day tournament;

“Everyone gives you tips on how to prevent sea sickness. For me, drinking fanta and staring at the horizon seems to work it’s getting better now the more and more we go out.”

This year Team Taumafai didn’t get to finish the tournament with any hardware which was a different outcome to the last three years having placed in the competition with some heavy weight fish but according to Fritz, that’s the nature of fishing and they will be back with a vengeance next year with a new strategy.

As for young Ellie, she’s already got a strategy in mind for next years’ tournament after she discovered what she reckons is the secret to luring the big fish.

“Elvis,” she said. “I was having a nap, and then they screamed my name because it was my turn and I remember that Elvis was playing when I caught the fish so my strategy next time is to play more Elvis songs when we are out on the water.”