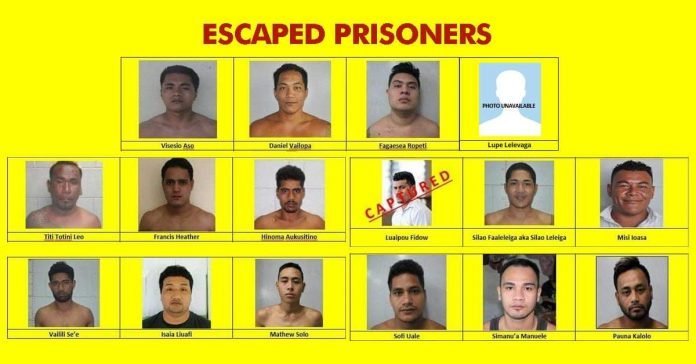 Amongst the 15 prisoners still on the run after a mass prison break from Room 1 of Tanumalala are convicted rapists and murderers.

The Samoa Police Service (SPS) continued to work into the early hours of the morning to bring matters under control after being informed by Samoa Prisons and Correction Services at 8.44pm Monday evening that 29 prisoners had escaped from Tanumalala.

As of 2.30am Tuesday morning SPS confirmed that a total of 15 prisoners were still at large; having captured Luaipou Fidow since their 1am update when 16 were left on the loose.

Luaipou Fidow is serving a prison sentence of 8 years and 8 months handed down by Justice Mata Tuatagaloa in October last year for attempted murder, after an horrific attack on his pregnant wife infront of their 2 year old daughter

Amongst those still missing is Isaia Liuafi of Manono Leauvaa and Talimatau, who had been sentenced in 2017 by Justice Tuala-Warren for raping a 10 year old girl who was waiting to be picked up after school. He had lured her into a nearby bush area after saying that her mom had sent him to collect her from school.

Another prisoner on the list is Simanua Manuele of Falefa and Toamua Uta, serving a life sentence for the double murder in November 2018 of two men, attacked and killed by Manuele using a machete (sapelu) as his weapon.

Convicted rapist Fagaesea Ropeti pleaded guilty in 2014 along with three other men to the gang rape of a girl under 20 years who had attended a party with her friends.

Daniel Vailopa had previously escaped prison in 2011 and again in 2015 with several other prisoners, and while on the run stole the mobile phone and attempted to rape a tourist who had been on an early morning walk on the popular Mount Vaea track.

Sofi Uale Tuaoi of Laulii and Foailuga is serving time for manslaughter when he caused the death of a security guard and father of eight in 2018, by striking his head with a beer bottle outside Seana bar when the security guard refused him entry.

Silao Faaleleiga of Nofoalii, Saanapu and Salailua Savaii had escaped custody as an 18 year old last year and was recaptured by Samoa Police in May 2019.

Visesio Aso of Matautu-tai and Laulii was imprisoned last year for robbing a taxi driver.

As promised, SPS have posted photos of those who are still at large for the information of the general public but do warn against anyone trying to approach the prisoners.

“We urge the public that they are considered dangerous and refrain from approaching them”.

The public are asked to report any sightings or information relating to these prisoners to SPS by calling 22 222 or any police station nearby.

One prisoner, Lupe Lelevaga’s photo is yet to be obtained from SPCS.

“We will post his photo once we receive it”.

“Again we thank all of Samoa for your ongoing support. God Bless Samoa!”