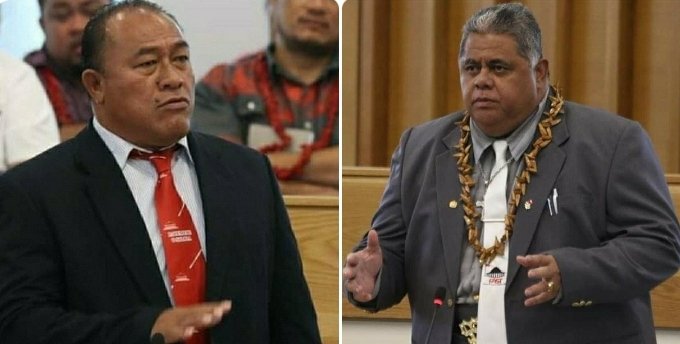 A Member of Parliament disqualified by the Electoral Commissioner from running in the upcoming general elections accused the FAST party of giving out misinformation about his ineligibility to run, saying his character was defamed during a political rally in his own constituency.

Member of Parliament for Aiga i le Tai, Mulipola Laki Leiataua is unable to contest his Parliamentary seat this April due to a 2015 traffic related conviction in the District Court of Samoa.

In Parliament yesterday, Mulipola stood to express his great disappointment with what he says was a character annihilation of him by the Faatuatua i Le Atua Samoa ua Tasi (FAST) political party, in Manono earlier this week.

He held up a bunch of papers and told Parliament the attack on his character had kept him up all night, adding that national stability is being compromised by the FAST party political rally approach.

“You have misled the people of my constituency with misinformation regarding MPs with convictions, and you attacked me,” said Mulipola.

In response FAST party leader Laaulialemalietoa Leuatea Polataivao Schmidt took the floor to say their campaign rally in Manono-Tai was an awareness raising community engagement to discuss their party manifesto and intended policies.

“Mulipola, it was your conviction that led the discussions to you..  but we did not intend to go there and speak ill of you…

“We responded to questions about you, and explained that Parliamentary rules had been broken.. We did not set out to do any harm toward you..” Laaulialemalietoa said.

Laauli then turned to address the Prime Minister, which ignited a debate that quickly turned ugly and personal.

Laauli had said their roadshows were to explain FAST policies and campaign messages, and not to cause friction amongst voters or unrest amongst citizens, as the Prime Minister had said earlier.

But Tuilaepa stood to voice his disregard for FAST party roadshows; now being shared widely on social media.

“We can see and hear everything you say..we are not stupid…you can’t fool all of the people, all of the time…’ he said.

“Why are you going to all these constituencies, misleading people with lies? . You four over there?..” Tuilaepa asked.

The Prime Minister said it was inappropriate for FAST party MPs to go into constituencies other than their own, “because each constituency had their own MP, able to explain things…”

Laauli responded that he no longer had respect nor faith in Tuilaepa, saying this was the reason he left the HRPP.

What transpired next was 4 minutes of personal attacks between the leaders of the two political parties, while the Speaker of the House Toleafoa Faafisi tried to calm things down.