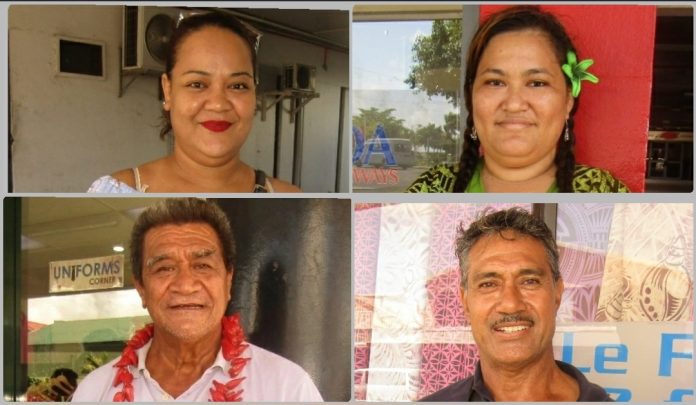 The Minister of Finance Mulipola Anarosa Ale Molioo tabled her first budget estimates as Samoa’s first woman Minister of Finance and amongst the long list of “firsts” is a slash in utility fees for electricity and water, as well as other services provided by the State.

The public interviewed by SGN mostly responded with appreciation to the decrease in costs to basic services, while there were a few still hooked on the campaign promise of $1 million per constituency to be allocated each year for district development plans.

Themed “Recovery, building resilience and shared prosperity for all the people of Samoa”, the budget sees a first time commitment by a Government to reduce water and electricity provided by monopoly State Owned Enterprises (SOEs) in Samoa – SWA and EPC.

“To further assist the country’s recovery, electricity and water
prices will be reduced by 20% effective 1 November 2021,” states the Minister of Finance.0

“Fees and Charges on specific services of the Government
will be reduced by 20% to assist the country during the COVID19”, continues Mulipola in her budget address delivered on Tuesday 14 September 2021 in Parliament.

Eight services were listed including the registration for private vehicles now issued by the Ministry of Police.

Taxi drivers interviewed by Samoa Global News said they hope this extends to their bi-annual registrations, although the Minister’s address does specify private vehicles.

They can however benefit from the slash in annual business licence fees issued by the Ministry for Revenue required per activity of businesses in the formal sector. Building Permits under the Planning and Urban Management Act (PUMA) administered by MNRE is also listed.

Also in support of business and income earning opportunities is an announced drop in alia fishing boat licenses.

Consultation fees at the National Hospital will drop by 20% as will Lands and Titles Courts fees and other charges collected by the Ministry of Justice and Courts Administration.

RSE workers still traveling out of Samoa despite border closures will be the first to benefit from the 20% drop in passport fees and charges collected by the Samoa Immigration Services.

Mrs Ivy Maalogo, 31 of Malie told Samoa Global News the drop in fees is a timely help – faamamaavega for her and her family as the impacts of border closures starts to take its toll on her daily budget – faasoa.

“Thank you to Fiame and her government for this assistance which is exactly where we need it for everyday needs for example electricity and water as well as hospital fees”, said Mrs Maalogo.

“We have felt the loss of income from SOE restrictions so this is a great initiative”.

Other assistance to be felt in household incomes across Samoa is the increase of elderly pensions from $160 to $200 per month and a disability benefit scheme for persons with disabilities that has been tagged for $3 million tala.

Arapi Faaaoloolo, 60, of Toamua said that extended families living together with more than one vehicle will feel the benefits of the 20% drop in registration fees.

Christina Lee-Lo, 34 of Vailima says the most important part of the budget for her and her family is the drop in water rates because “water is life”.

She commends the changes (suiga fou) brought by the new Government.

Likisone Iose of Vaiee says he is grateful for the drop in government service fees and hopes for an increase to salaries for his children who work in the formal sector, as there are many village and church obligations that he says his family struggles to meet.

Ili Samu, 61 of Satapuala, however, was skeptical of the new government’s budget. Two more members of the public interviewed shared his views but did not wish to be named.

“This new government said in their manifesto they’d give out $1 million tala to districts but now where is that?” he said.

“So now we hear there’s more things promised and I just hope that all of it can be implemented”, he said.

Several MPs have queried the $1m tala promise in Parliament. Associate Minister of Justice Fesolai Apulu Tuigamala questioned the $1m tala allocation in his address to Parliament last week. MP for Faleata 4, Ale Vena Ale also mentioned the campaign promise, adding that in his view, this was a major influence over voters in the April general election.

The FAST manifesto widely publicised through an aggressive pre election campaign said there would be a development type fund of $1 million tala for community projects based on specific needs of the 51 territorial constituencies or districts in Samoa. It was announced that this allocation would be distributed each year over the five year term.

Prior to the budget address Prime Minister Fiame Naomi Mataafa in a weekly press update with local media pointed out that this financial year was already well underway and the Budget would include an allocation for preparations towards the implementation of this initiative, but not for its actual full roll out.

“The year is already well underway..and there are funds to plan for the implementation of that initiative (e tapena ai),” said the Prime Minister at the time.

The remaining months of the 2021-2022 allocates $11 million under the Ministry of Women Community and  Social Development for “District and Community Programming and
Scoping” with a proposed $200,000 tala for each district.

The Minister of Finance said there were challenges in preparing a transitional budget to ensure prior commitments are met while implementing the new government priorities.

Mulipola highlights that total public debt now stood at 50% of GDP – 10% more than the set fiscal target of 40%.

States the Minister of Finance, “The Government’s total public debt to date has reached $1.0 billion, this is equivalent to about 50% of GDP. It is unfortunate for the new government to inherit such high debt but it is committed to start reforms on governance to include public finance management, debt sustainability and fiscal consolidation in general to build adequate fiscal space for ‘rainy days’ over the medium term”.

The full budget address can be read by clicking here.