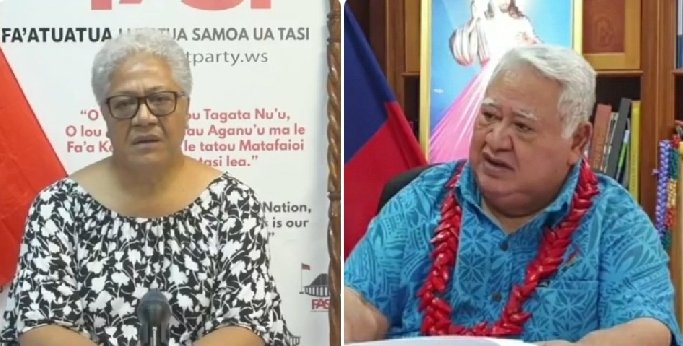 29 May 2021 Apia Samoa. As the political crisis in Samoa continues, the public are now receiving messages from two governments, one led by Prime Minister Elect Fiame Naomi Mataafa, and one led by Caretaker Prime Minister, Tuilaepa Sailele Malielegaoi.

The legality of the swearing in of Hon Fiame is being challenged in Court, and the continuation of Hon Tuilaepa as caretaker is questionable after the 45th day following elections.

Meanwhile two Court cases are pending, both crucial to the future of Samoa’s government and April 9th general election results.

On Monday 31st May 2021, the day before Independence Day, the Court of Appeal will sit over the question of whether the minimum requirement of Article 44(1A) of Samoa’s constitution translates to 5 or 6 women. If 5, FAST remains election winners with 26:25 however if the Court of Appeal decides the number is 6, Samoa may ultimately have to return to the polls.

Also on Monday, the Supreme Court will hear an application by the Attorney General, asking that the swearing in of FAST elected members on Monday 24th May, be declared unconstitutional.

On Friday, Tuilaepa Sailele Malielegaoi aired a live broadcast from the office of the Prime Minister, conveying to the public that he is still in charge. He reiterates his position that nothing can move forward until the sixth seat for women is decided by the Court of Appeal. 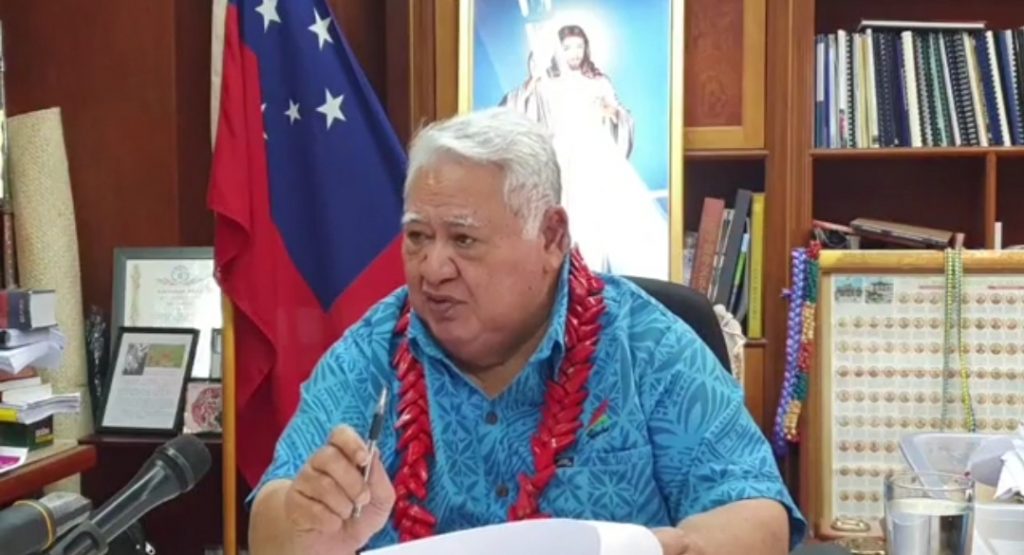 He says he is willing to accept whatever decision the Courts hand down, and confirms a meeting of all HRPP supporters is scheduled to convene at Mulinuu on Monday, to support the pending court cases. In recent FAST challenges before the Court, a sea of red supporters has been a regular scene outside the Mulinuu Courthouse.

He then reads out a letter written by Prime Minister Elect Fiame Naomi Mataafa, addressed to the Head of State, copying him in. He observes that he is cc’d as just Tuilaepa, and not addressed as the Prime Minister. He accuses FAST of acting unlawfully and being high-minded to assume the position of leadership. In his usual half-joking jabs, he makes fun of the name of the Speaker Elect also cc’d in the letter written in the Samoan language, and also points out a spelling error.

Prime Minister Elect Fiame Naomi Mataafa went live to address the nation at 8pm on Friday night. In a press release issued from the Office of the Prime Minister, Fiame outlines the transition process to a new government and called on public servants to maintain their independence and continue to carry out their duties. 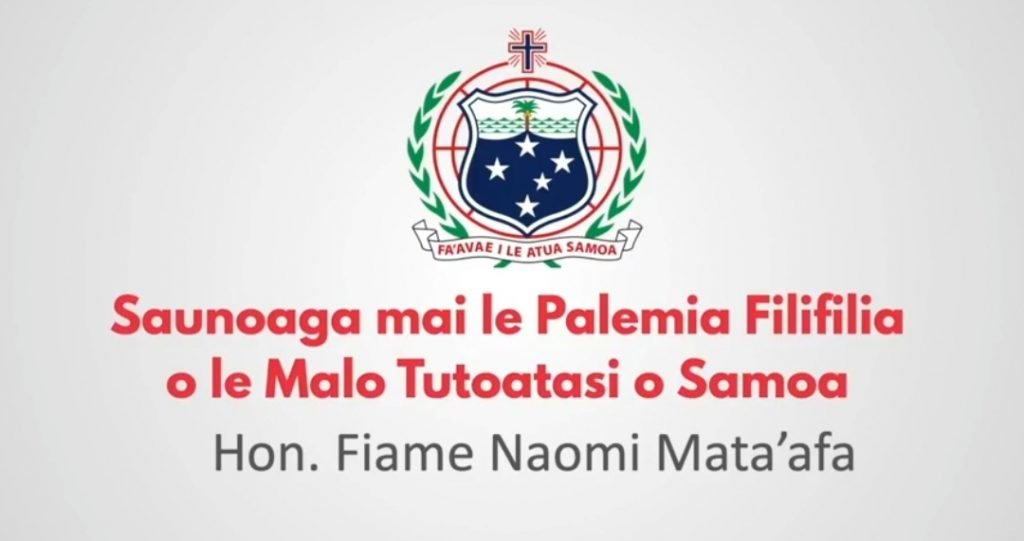 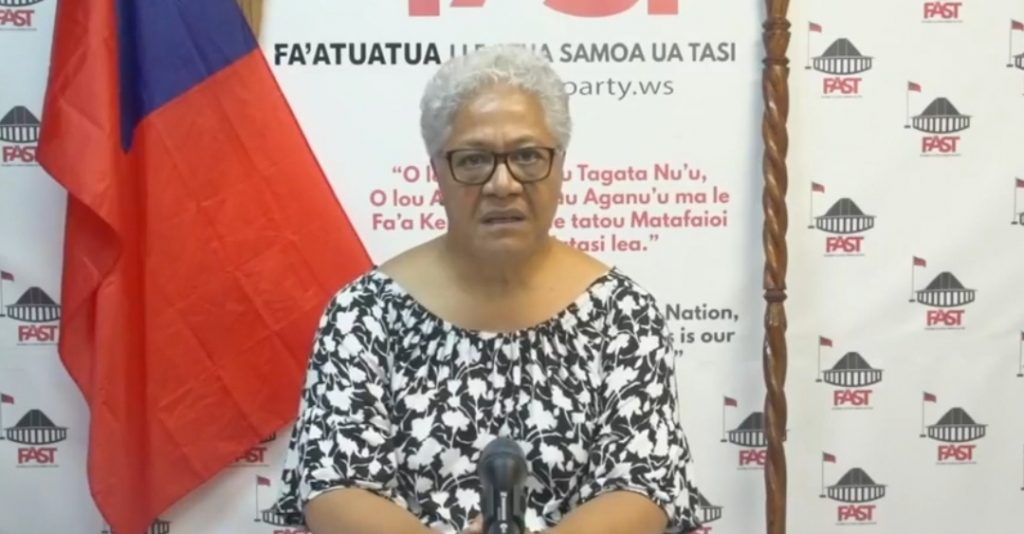 “On Monday this week, myself and 25 of our members were sworn in as Members of the 17th Parliament of Samoa. To change from the HRPP Government to the FAST Government, needs planning and preparation, and does not happen quickly, especially when the party in power has been there for decades.”

Fiame thanks Tuilaepa for his service and asks that he step down graciously.

“Your long legacy is an extraordinary one of great achievement and global milestones, for which this country is rightly grateful, however, the more disruptive and disrespectful you become, the more that unique legacy is diminished and tarnished, by your own words and your own deeds.”

Addressing the public, Fiame acknowledges difficulties that come with change, and asks for patience during the transition.

“Finally to the public, please continue to ‘keep the faith’ and also your patience, as we work through the move from the ‘old’ government to the ‘new’ one, with care and efficiency, deliberately and wisely, so that the shock of change is reduced for the workers and the public and our overseas partners, as much as possible”.

Also on Friday, the caretaker government sent out a programme from the Ministry of the Prime Minister & Cabinet, setting out the details of a digital Independence Day celebration to be broadcast online, similar to what was done last year. 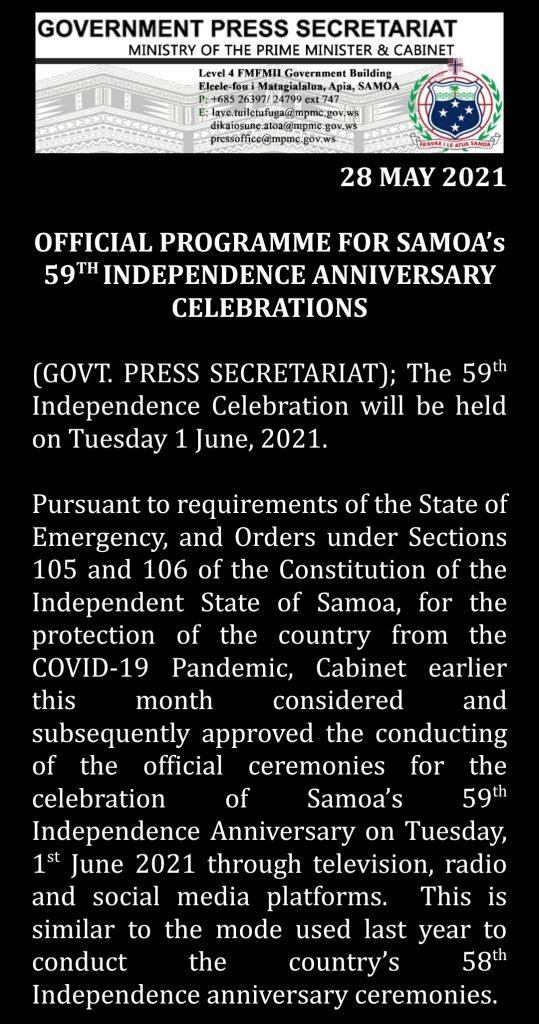