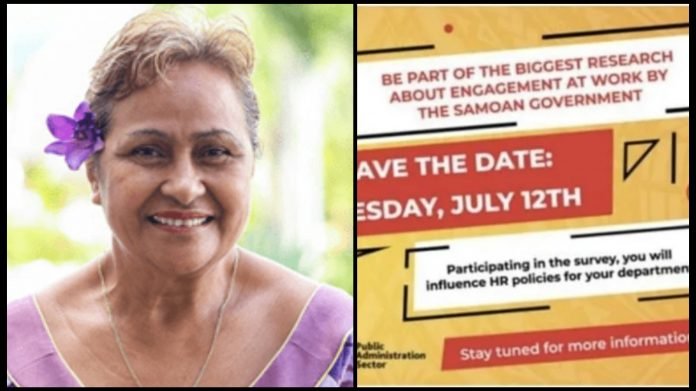 The Office of the Public Service Commission (PSC), with the assistance of the United Nations Office on Drugs and Crime (UNODC) will roll out an inaugural Public Sector Staff Engagement Survey this month.

While there have been undertakings of this nature before, they were mostly on a smaller scale. This will be the first whole of government survey since the reforms of the 1990s, a press release confirms

“It is considered a critical piece of work under the Public Administration Sector, as it will help identify areas where government could do better in engaging and motivating public servants”.

The Chairman of the PSC, Lauano Vaosa Epa,
highlighted the importance of this work at a meeting of human resource management focal
points in government Ministries, on 29 June 2022.

“The survey aims to collect data to assist the government in identifying ways to empower
public servants and increase productivity across the board..

“Further, it will inform strategies to foster and ignite a Spirit of Service to strengthen service delivery, as well as develop new standards on how to do evidence-driven human resource
management in Samoa and other Pacific Island
countries”.

The PSC plans to mobilize key personnel in government agencies to ensure that the survey findings will be succinct, informed and targeted, adds Lauano.

“The PSC and the UNODC believe that the finishing product is not the survey itself, but the interventions that will be developed and implemented at a later stage”.

Chairman Lauano noted that this work will contribute to the realisation of the long-term outcome of the Public Administration Sector, to have a trusted, citizen-focused public administration.