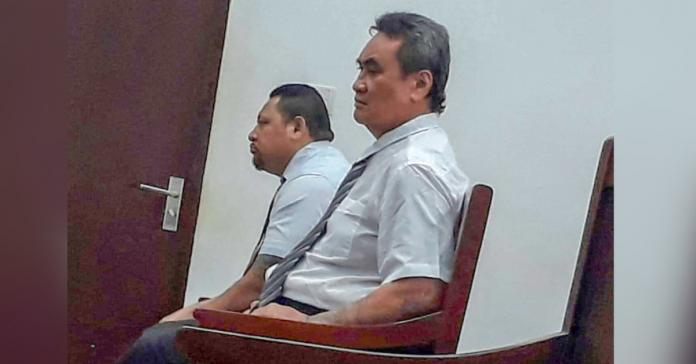 21 June 2019, Apia Samoa. Tagaloasa Filipaina and Ovaleni Poli are appealing the decision by Justice Tafaoimalo Leilani Tuala-Warren, denying their application to be transferred back to Tafaigata prison from the Police Station cells in Apia where they are being held.

Filipaina and relative Ovaleni Poli Viali were moved from Tafaigata and taken to the Apia police cells for allegedly masterminding an aborted mass prison breakout during cyclone Gita in February last year.

During a two-day hearing earlier this year, Tagaloasa Filipaina told the Court that they wanted to return to Tafaigata where they have the freedom to cook, attend church, have access to music, watch television, read newspapers and books, have more time with their lawyer and longer visits with their family“.

The drug lord, first convicted with the murder of a police officer in the 1980s and then later for the murder of a man in his community told the Court that all the prisoners and many of the prison guards as well as police, know of his food preferences. For example, they know that he does not eat chicken and eleni sosi tamato.

Justice Tafaoimalo delivered a decision stating that the prisoners’ constitutional rights have not been breached.

“There is no breach to their constitutional rights necessitating a remedy to be given by the Court,” said Justice Tafaoimalo at the time.

During the hearing Prosecution told the Court that keeping the prisoners in the air conditioned Apia cells was a temporary measure to await the new prison being constructed at Tanumalala.

Counsel for the prisoners Unasa Iuni Sapolu disagrees. Speaking to Samoa Global News Unasa said the rights of the two applicants under the International Covenant on Civil and Political Rights has been violated.

“Leilani completely ignored the international declarations on the rights of prisoners and said the ICCPR a UN Convention doesn’t apply to Samoa,” she said.

“Pro bono and seeking donations for the marginalised of our society; the poor, the weak can’t continue appeals as no money allocated.

“But prisoners rights needs a clear pronouncement from the Court of Appeal, money or no money.”

Unasa says the government should consider civil legal aid for civil appeals such as Filipaina’s case.

“Prisoner’s rights are a public interest issue, and ought to be funded by the state.

Police Commissioner Sua Fuiavailiili Egon Keil said that he is unable to comment because the matter has been appealed and awaits further Court proceedings, however, he gave his assurance that the prisoners were being treated well.

“We give both of them the most humane conditions possible and the respect a prisoner is entitled;

“We not only consider the law, but do also take into account our customs and traditions while in our custody.”