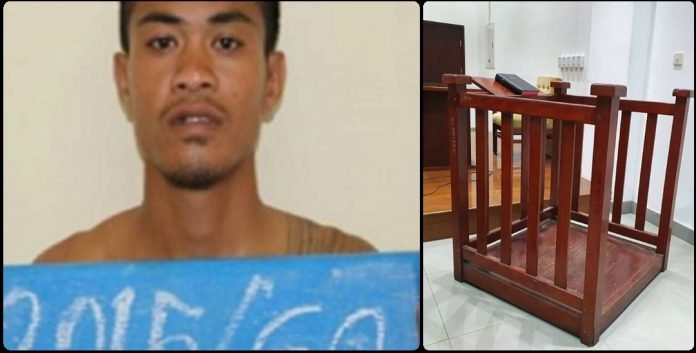 18 October 2021, Mulinuu Apia Samoa. An escaped prisoner who used a ladder to climb over the Tanumalala Prison security fence and was returned a few hours later, appeared in the Supreme Court this morning and pleaded guilty to 4 charges of burglary.

Vaai Panapa entered two properties in the farmlands at Fiaga, during the short time he was out of prison.  According to police files, the first property the prisoner entered belongs to Apostle Viliamu Mafoe, the head of Samoa’s Worship Centre. Police charge sheets confirm that Panapa stole a .22 rifle with a black scope valued at $1,200 tala from the property of the Church leader.

He also entered the home of Time Ah Sue in Fiaga, using the stolen firearm. He is charged with burglary as well being armed with a dangerous weapon.

In 2016, the now 23 year old prisoner has also escaped from Tafa’igata Prison, and was again captured and returned.

Panapa will be sentenced on the 15th of November for the additional charges against him.