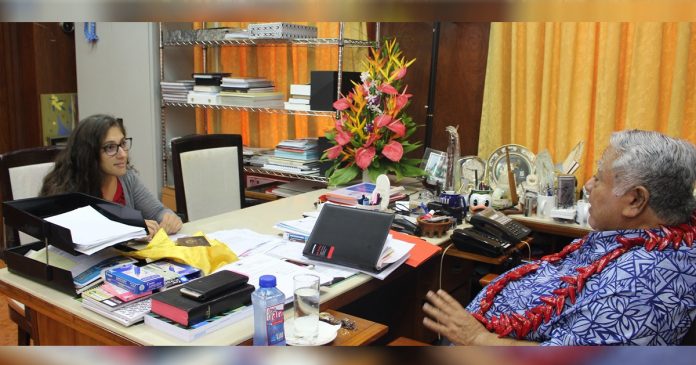 03 February 2019, Apia Samoa The Government Press Secretariat has sent out the written responses of Prime Minister Tuilaepa Sailele Malielegaoi to questions that had been given to him by Samoa’s only daily newspaper now in its 40th year of operation, Samoa Observer.

We print the Question-Answer document below in verbatim.

Q.1:  Can you please explain your comment that you would blow up petitions against the Electoral Constituencies Bill 2018?  What does that mean?

PM: The comment was a figure of speech, a simple matter for a journalist of Samoan roots with some depth of our cultural knowledge.  It is one of the oldest and most popular sayings or tactics used by Samoan matais to emphasise the importance of an issue.  It was literally blown out of proportion and deliberately sensationalised as usual by the Observer for the sake of a dramatic headline to sell their paper.

The Electoral Constituencies Bill 2018 is the last phase of the long line of many, many electoral reforms initiated by the HRPP government for the close to 4 decades ago.  Since the HRPP came into office, respective Electoral Commission of Inquiries were established to review the electoral processes after every General Elections to minimise and remove any corrupt practices observed during the election.  But as we all know while government does not condone corrupt and illegal electoral practices before, during and after general elections, candidates always seem to be creative in all kinds of tricks to win.

Q.2: Regarding the potential establishment of a three tier court, what are the advantages and disadvantages to having such a court system in place of the current one?

PM:  The Press Secretariat has issued a press release to this effect and the benefits are quite obvious e.g.  It protects the rights of all Samoans today and future generations to come.  The Bill is also posted on the Parliament of Samoa’s official website http://www.palemene.ws in both Samoan and English languages for anyone who is interested to read and understand.

Q.3: The national airline has signed a dry lease for a new aircraft.  How does Samoa Airways intend to finance the aircraft?  Can you give us an indication of the financial performance of the company, and when will you be in a position to share financial reports with the public?

PM: The Samoa Airways will finance its proposed Boeing Max 900 the same way the Airline financed the first Boeing 737-800.  On its financial reports, the Board will issue its own reports when its Accounts are audited.  It is a normal process with all kinds of businesses.

Q.4:  As the chair of the Samoa Rugby Union, what comment do you have about the passing of a young man suffering head injuries at a rugby game on Saturday? Is rugby safe enough to play, and is the Samoa Rugby Union well equipped and well-funded enough to protect players from the repercussions of injury? Especially as the Red Cross was absent for this game (unlike others). Does SRU properly insure players or ensure they are insured?

PM:  It is a very sad and unfortunate incident. I note, the SRU’s Chief Executive Officer has already commented on this issue which was published by your newspaper.  The CEO, as you should know deals more with matters of details you raised.

Q.5:  Two more prisoners escaped Tafaigata prison this week. Why does this recurring issue happen and what will you do to prevent it going forward, to protect citizens not only in the village area but across Samoa? Furthermore – when will prisoners be relocated to the new prison site, is there a date set? And what has been planned for the site at Tafaigata? It has been put to the Observer there are proposals for a Zoo AND a Police Academy – which is it?

PM:  I have been informed that public alerts were immediately issued by prison and police officials to warn the public once the two prisoners were discovered missing.  Better security is the reasons for the new Tanumalala prison which should open for use this year.  A Police Academy is a government project.  The proposed Zoo is a private project.  When these projects finally take off, a release will be issued.

Q.6: As the Minister of Police, what comments do you have regarding the police commissioner and media team being uncommunicative with media? They routinely decline requests for comments, which is their responsibility. The Police Commissioner and the Deputy Commissioner must be more available to media as they are the only people with clearance to comment to media, but barely make themselves available to do so.

PM:  There is a long standing policy for the appropriate authorities from CEOs to Cabinet Ministers to respond to media inquiries in a timely fashion. However like the media industry, police also has its own code of ethics and due process when it comes to the release of information to the media. Both the Commissioner and his Deputy are highly qualified professionals and I trust their judgment to deal with any media inquiries appropriately.  The two top law officials at times are not readily available as they have more pressing matters pertaining to the safety and security of the country to deal with rather than to assist in writing your ready-made articles to be published every week.  As in any business public relation is very important.  Your usual style of asking for information to be used by you to ridicule the source does not help.  Then you wonder why CEOs avoid wasting their time when they have more important things to do.  Always remember that the Government also issues what we give you on our own websites to ensure the readers also have access to Government’s releases because you only publish little of what we release and leave out what reflects on your papers bad practices.

On that note, I again reiterate an earlier suggestion for media personnel to use the Courts as a credible source of information since that is where all the evidence and investigation findings supporting the charges will be made public.  I think the media at times are spoiled and are expecting to be spoon-fed by government.

Q.7: Lastly, when will Parliament move into the new Maota Fono at Mulinuu? What delays have occurred to mean parliament cannot begin there, despite the architects assuring readers in November the building would be ready by Christmas.

PM: As soon as the new Parliament Building is ready to be dedicated, the Samoa Observer will be the first to know.

I hope you will publish everything.  Not just the little references that you like. Thank you again. I look forward to reading your articles.