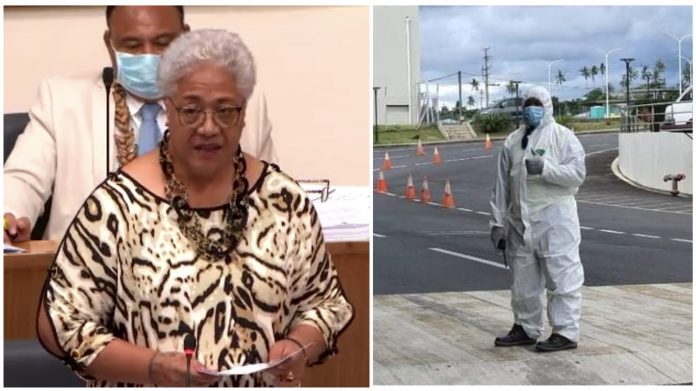 Samoa’s National Emergency Operations Centre (NEOC) says there is no risk to Samoa after a frontliner broke the rules and left managed isolation with a staff driver, to go to an ATM machine.

The Prime Minister told Parliament that an NEOC report on the incident has been released, and it confirms a frontliner did leave a quarantine site last Saturday 29th January.

“One of our frontliners went with a NEOC driver, to use an ATM, and by doing so, they have breached Samoa’s State of Emergency orders,” said the Prime Minister.

Fiame reminded Parliament of a similar incident a few months ago in October 2021 when a returning seasonal worker had also left managed isolation and went to a money transfer office in Apia before he was recaptured. “You will recall that NEOC had to conduct rapid contact tracing and bring that situation under control.”

The matter is now with the Police for investigation and action, Fiame told Parliament.

The message from NEOC is that Samoa has nothing to worry about, and there is no evidence of a community transmission, assured the Prime Minister.

Addressing Parliament, Fiame reiterated calls made earlier by Members of Cabinet, for Samoa to remain united in support for one another as the country continues to protect itself from the global pandemic.

Flight QF 115 was a chartered Qantas flight of Australia’s Pacific Flights program, one of the approved flights for the first quarter of 2022 intended to take seasonal workers from Apia to Australia. On its way to Apia, it presented the opportunity for the repatriation of citizens who had been on a waitlist since the global pandemic closed most international borders including Samoa.

The passenger list was prepared by those who had registered with the Samoa Consular office in Sydney and a few who registered directly with authorities in Samoa. The total flight list was 261, however, on the day of the flight only 73 passengers were allowed onto the flight.

The Sydney Consular office reports reasons for the vast drop in numbers able to travel that day; 1) some had become infected over the Christmas period, 2) some were unable to renew their passports in time, or did not have exemption stamps in their foreign passports, 3) some intended to move to Samoa for good, however, had not been able to sell their homes in time, 4) some reported they were unable to pay their fares and 5) some rescheduled.

The Prime Minister also addressed rumours circulating that passengers on the repatriation flight from Brisbane included a family travelling back to attend a funeral.

The official response from the government is – if there were individuals who returned to Samoa to attend a funeral, then this was never properly disclosed to authorities. Samoa’s pre-departure conditions requires all passengers to show negative covid-19 tests.

When the 73 passengers arrived into Faleolo International airport at 4pm, all were tested, and their results had become available later that evening.

All 73 passengers are double-vaxxed, with some having already received their boosters. The only exception being the 9 children under 12 years, who were on board.

All those in managed isolation are staying in 17 locations around Apia including the TTM National Hospital and Faleolo District Health Centre.  There are 12 locations where passengers are staying, while the frontliners are currently being quarantined in five locations.

The Ministry of Health has completed the 4th round of testing for passengers and frontliners. There is no evidence of a community case. For the 228 frontliners in quarantine, no-one has returned a positive test, except for the 5 nurses monitoring the positive cases at the Tupua Tamasese Meaole (TTM) Motootua hospital isolation ward.

All of Samoa’s positive cases remain asymptomatic, and testing continues in 44 hour cycles for all in managed isolation and quarantine sites.  The Ministry of Health also reports that the virus has an incubation period of 10 days.