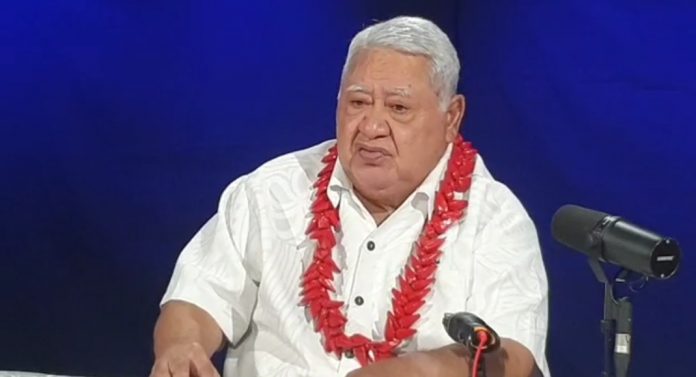 Caretaker Prime Minister Tuilaepa Dr Sailele Malielegaoi says he and members of the Human Rights Protection Party will not be sworn in when Parliament convenes tomorrow.

A special sitting in Chambers of the Supreme Court was called at 11am Sunday morning to hear an application by FAST lawyers seeking to challenge a late night proclamation by the Head of State to postpone the official opening of Parliament. Two days earlier, the Head of State had signed a proclamation dated 20th May declaring Samoa’s XVIIth Parliament to convene on Monday 24th May 2021 (tomorrow).

The Supreme Court has had to decide the legality of several post-election decisions and in its judgment of 17 May 2021 the Court ruled against a writ issued by the Head of State to call fresh elections, and reminded His Highness of his constitutional obligation to call a meeting of the Legislative Assembly within 45 days of an election.

Addressing the nation via live broadcast almost immediately after the Supreme Court’s orders were made known, Hon Tuilaepa Sailele said HRPP members cannot be sworn in without the additional woman Member of Parliament.

“As for me and my HRPP party members, we are not going to be sworn in because we know that the 10% minimum required for women in Parliament has not been satisfied,” said Tuilaepa.

“Noone has gone to church, and that goes against the Law, the Law of God and SOE Orders”.

“The refusal to accept electoral defeat has moved from obstruction and defiance by the Caretaker Prime Minister (including misusing all the resources belonging to the Government so he maintain political power for himself and his party), to now the complete disregard for the law-as pronounced by the country’s own Courts, and the esteemed and respected Judiciary: who represent the last and final barrier before the slide into tyranny and autocracy over this land”.

“The Clerk of the Legislative Assembly and his staff, as well as those who have been elected and their families, the diplomatic corps, church and business leaders, are prepared for this day. Those preparations should continue because this is yet another attempt by the Caretaker Prime Minister to undermine, and in this case to completely breach the requirements of the Constitution (yet again) and in doing so to act in complete disregard of the two decisions of the Supreme Court delivered on Monday 17 May 2021 and the Court of Appeal’s decision on the stay application on Friday”.

“Let us focus on the people that we are – law abiding, respectful, faithful and humble with a culture moored in respect and Christian values, and place our trust in the law, its processes and the desire for justice in every aspect of our lives, so we may get on and act for the benefit of all of our people present in Samoa and with Samoa in mind overseas”.

“I sincerely entreat the Caretaker Prime Minister to allow the votes of your people to be properly acknowledged so that their representatives may take their proper seat in Parliament and be allowed to govern according to their wishes and not yours”.