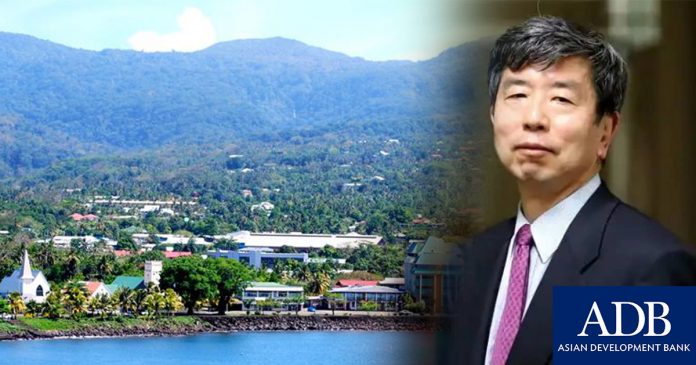 The President of the Asian Development Bank, Takehiko Nakao is adamant that customary lands in Samoa are safe and that our people should not be worried.

He made the comment during a press conference this afternoon when it was put to him by the media that some members of the community believed ADB was behind the enactment of the Land Titles Registration Act  2008.

The Land Titles Registration Act (LTRA) of Samoa was passed in 2008 and came into force in March 2009. The Samoa Solidarity International Global (SSIG) group have filed a $5 million tala law suit against the Government questioning “legality” and “constitutionality” of the Act.

The SSIG is seeking the Court to void the L.T.R.A. 2008 claiming that it violates Article 102 of the Constitution (102 refers to ‘no alienation of customary land’), demanding that all customary land leases be returned to their original and traditional state of ownership prior to 2008.

In response President Nakao said that ADB have been supporting the economic use of customary lands not only in Samoa but in many countries of the region and added that what they are looking at is a way to improve land usage through better registration systems.

“This way there will be less dispute of land..that is our purpose and so I hope that the people understand..and it is not to infringe on the right of customary land.”

“So there is no such thing to impede on customary lands or tradition,” said President Nakao.

Prime Minister Tuilaepa told the media that this issue has been explained to the public so many times before and reiterated that there is no violation of Article 102 adding that no customary land has ever been sold.

“This has been clarified again and again by the Attorney General,” said Tuilaepa.

Attorney General Lemalu Hermann Retzlaff in a statement issued December 2017 had assured the public that the LTRA Act dealt only with freehold land and that it could never be utilised to interfere with customary land rights which he says are protected in the Constitution.

“LTRA 2008 does not have the effect of amending, repealing or adding to the provisions of Article 102 of the Constitution which specifically defines our customary land allowing all other legal protective measures to therefore, by operation, apply to it.

“Our Customary Land is not under any legal threat from laws that oversee specifically freehold land,” reads the statement from the Attorney General.

At yesterday’s media conference, Tuilaepa went on to say that the only person recognised by the constitution to advise the government on the issue is the Attorney General.

“So this is understood by so many Samoan chiefs and the AG is also a Samoan matai and he is backed by other educated lawyers and there are 50 of them, and supported also by the Office of the Law Reform Commission.”

“And there are only one or two lawyers that are digging up this fuss about the dangers with our customary lands,” he said.

“This is all fake news,” adds Tuilaepa.

Samoan lawyer Unasa Iuni Sapolu who is a member of the SSIG group believes that customary lands in Samoa are not safe. Their team of lawyers are currently undertaking research in New Zealand in preparation for the civil suit.

“We believe our customary lands are not safe and that a change to use customary land leases as securities for loans etc. is a breach of Article 102 of the Constitution of Samoa and that being so requires a referendum of two thirds of the majority of voters,” she said.

“It’s very concerning that the same laws as the L.T.R.A. 2008 was introduced in New Zealand and left Maoris poor and deprived against palagi and foreign ownership“.

Mr Nakao is the first President of the ADB to visit Samoa since the bank’s stablishment in 1966. Samoa was a founding member of the Asian Development Bank having been the only independent Pacific Island state at that time. ADB has since supported 149 projects in Samoa totalling US$354 million tala.