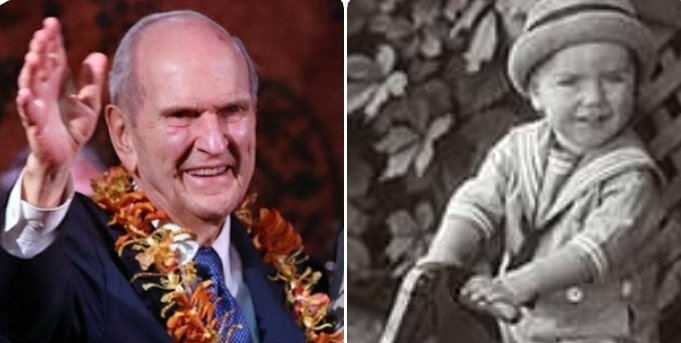 President Russell M Nelson turns 96 today and hundreds of thousands of Church members have taken to social media to wish him a happy birthday.

President Nelson has posted his own birthday message on his Facebook page, shared over 2k times in the first half an hour.

“Today I am 96 years old! Many years have passed since this photo was taken when I was a young boy, and in those years I have been blessed richly with opportunities to meet and come to love God’s children all over the world. I have also witnessed many miracles and mercies from the Lord;

“Many of you have wished me a happy birthday. I wish to thank you and express my love for all who read this. The Lord loves you, and I am a witness that He is in the details of our lives”.

The leader of the Church of Jesus Christ of Latter Day Saints was born 9 September 1924, as the son of Marion C. and Edna Anderson Nelson. He was set apart as the 17th president and prophet of the Church on Sunday 14 January 2018 in the upper room of the Salt Lake Temple.

He and his late wife, Dantzel, have 10 children. She passed away in February 2005. In April 2006, President Nelson married Sister Wendy Nelson.

President Nelson, his wife, Wendy, along with Elder Gerrit W. Gong of the Quorum of the Twelve Apostles and his wife, Susan, visited Samoa in April last year as part of a ministry visit to seven countries in the Pacific.

In Samoa tens of thousands gathered despite a drizzle of rain that night at the Pesega school grounds to hear him speak.

“Thank you for your great faith,” President Nelson had said when he addressed the crowd. “I wondered if you could do it. You turned off the rain!”

President Nelson had praised and encouraged the Samoan Latter-day Saints that night, and warned them to protect themselves and their families.

“There are difficult days ahead,” he said. “Please protect your children. Help them to know the Lord and love Him and keep His commandments and be free from the shackles of addiction and bondage.”

President Nelson warned against attacks from the adversary and told the people of Samoa that God would provide them with revelation, strength and the ability to judge right from wrong.

“This Church, when restored in its fulness, will prepare the world for the coming of the Lord, but not before Christ’s followers are persecuted”, he had said.

“Church members in the Samoan Islands will not be immune from being persecuted,” he said, warning them to “prepare to be persecuted, even every day,” and telling them they have a solemn duty to prepare for it.

“Please protect your families from the deception you will see in your future,” he said. “That’s why we are all busily engaged in this work. We have to fortify our people against attacks of the adversary.”

Prior to his service as head of the Church, President Nelson served as president of the Quorum of the Twelve Apostles from 15 July 2015, until his call as the Church’s leader. He has served as a member of that quorum since 7 April 1984.

President Nelson has held numerous positions of responsibility in the Church. He served as stake president of the Bonneville Stake from 1964 to June, 1971, when he was called as general president of the Sunday School. Prior to his call to the Quorum of the Twelve, he was serving as a Regional Representative assigned to the Kearns Utah Region. He had previously served as Regional Representative for Brigham Young University.

His professional work included the positions of research professor of surgery and director of the Thoracic Surgery Residency at the University of Utah and chairman of the Division of Thoracic Surgery at LDS Hospital in Salt Lake City.

Author of numerous publications and chapters in medical textbooks, President Nelson lectured and visited professionally throughout the United States and in many other nations prior to his call as a General Authority.