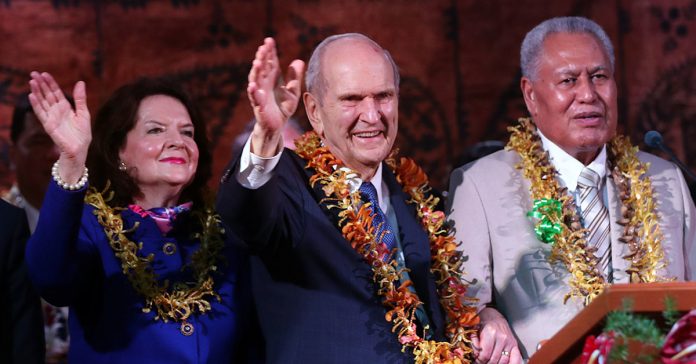 18 May, 2019. By Tad Walch. APIA, Samoa — The expected rain finally fell from the night sky here on Saturday night and made soggier the thousands of people already damp from the smothering humidity that enveloped them as they waited on stackable plastic chairs for the arrival of the first leader of The Church of Jesus Christ of Latter-day Saints to visit Samoa since 2005.

President Russell M. Nelson walked in under an umbrella after meeting with Samoa’s prime minister, but then, as suddenly as the steady drizzle began about half an hour before the May 18 event, it stopped after the opening hymn.

“Thank you for your great faith,” President Nelson said when he spoke at the end of the meeting. “I wondered if you could do it. You turned off the rain.”

The Apia Samoa Temple’s spire served as a backdrop and thousands of crickets provided background music as President Nelson praised and encouraged the Samoan Latter-day Saints and warned them to protect themselves and their families.

“There are difficult days ahead,” he said. “Please protect your children. Help them to know the Lord and love Him and keep His commandments and be free from the shackles of addiction and bondage.”

The Samoan head of state attended the meeting after welcoming President Nelson at his official residence in the afternoon, when he accepted an invitation to speak at the devotional.

“Let’s stick to the foundation of Samoa, which is founded by God,” said His Highness the Honorable Head of State Tuimaleali’ifano Va’aletoa Sualauvi II, who is descended from the nation’s first Christians and is a lay minister in the Congregational Church of Samoa.

He said he had experienced President Nelson’s “loving kindness” at his residence and told him, “I thank God for the opportunity to meet up with you and your good lady.”

Large temporary tents protected about half of the audience from the rain and spurred Elder O. Vincent Haleck of the Church’s Pacific Area Presidency to compare the evening to the Book of Mormon story of King Benjamin inviting his people to bring their tents and pitch them facing the temple, where he stood on a tower erected for the occasion.

President Nelson stood at a podium on a stage constructed for Saturday night’s event and warned about Bible and Book of Mormon prophesies of persecution of those willing to bear the name of Jesus Christ.

“This Church, when restored in its fulness, will prepare the world for the coming of the Lord,” but not before Christ’s followers are persecuted, he said.

“Church members in the Samoan Islands will not be immune from being persecuted,” he said, warning them to “prepare to be persecuted, even every day,” and telling them they have a solemn duty to prepare for it.

“Please protect your families from the deception you will see in your future,” he said. “That’s why we are all busily engaged in this work. We have to fortify our people against attacks of the adversary.”

He told them not to become discouraged. He said God will provide them with revelation, strength and the ability to judge right from wrong.

Sister Wendy Nelson said her husband often receives inspiration for the direction of the Church during the night and gets up to take notes.

“Just this past week,” she said, “the inspiration was flowing so rapidly during those early morning hours that he went to the office in our home and wrote for three hours.”

The Nelsons each thanked the hundreds of Samoans who lined the main road from the airport to Apia to see them — and Elder Gerrit W. Gong and his wife, Sister Susan Gong, who are accompanying the Nelsons on the nine-day Pacific ministry tour — pass by during the hourlong drive into the capital.

Elder Gong said Church members have three centers — the temple, their homes and their families — and said homes can be temples for families and bodies are temples for the spirits of God’s children.

“Part of being a temple is caring for our health,” he said, adding. “As we take care of our physical bodies, we become more able to have His Spirit touch our spirits.”

Sister Gong said that since her husband was called to the apostleship a year ago, they have learned much from watching the Nelsons. Elder Gong recently told her about walking into President Nelson’s office to find him underlining scriptures.

“What are you doing?” Elder Gong asked.

“I’m underlining the titles of the Savior in the scriptures,” President Nelson said, referring to a challenge he’d given to Church members and had already reported that he’d finished.

Elder Haleck called the devotional a unique opportunity and encouraged his fellow Samoans to listen to President Nelson with their ears and hearts. His wife, Sister Peggy Haleck, said following the gospel and President Nelson’s counsel would strengthen Samoa’s families.

“He is the anointed of the Lord,” she said. “I promise you as we follow him, we we will always be in safe waters.”

The affection of Samoan Church members for President Nelson was most evident as he stood to leave. The entire crowd stood and sang to him the Samoan song “Goodbye My Friend,” about American soldiers leaving Apia for home. The song includes a request sung in Samoan, “But never forget Apia, our home, and always remember those who stay behind.”

The refrain, sung in English, is a reply from the departing American, “Oh, I Never Will Forget You.”

President Nelson departed the covered stage as a few raindrops began to fall again, climbed into a van and pulled open a sliding window to wave as Samoan Saints flocked to a fence to wave back.

The temperature was 81 degrees when the meeting started, but 89 percent humidity made if feel like 89 degrees. For most of the meeting, there was no breeze to mitigate the heat.

“I was wet,” admitted April Fulumu’a, 17, who sat on a chair in the open air. Fulumu’a is a student at the Church College of Pesega on the temple campus where the meeting was held. “No, the rain wasn’t going to keep me home. I’ve been waiting for this. It’s too rare an opportunity to see a prophet. It was a great feeling when he gave us blessings at the end.

“It was worth getting wet.”

Samoa’s top leader, Prime Minister Tuilaepa Aiono Sailele Malielegaoi, met privately with President Nelson prior to the devotional, which was attended by two members of his cabinet — the minister of agriculture and fisheries and the minister of revenues and prison.