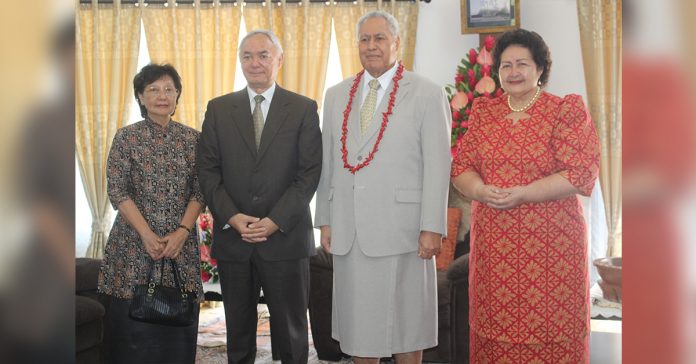 19 march, 2019. Apia – The credentials ceremony, accrediting H.E. Dr Trevor Matheson as the new High Commission of New Zealand to Samoa, started with the Head of State requesting a moment of silence to pray for the victims of the recent tragic events in Christchurch New Zealand. His Highness during his statement strongly condemned the attacks, which he referred to as “immoral and heinous”. His Highness added to “convey our deepest sympathies and heartfelt condolences on behalf of the people of Samoa, especially to the families of the victims. May God comfort those mourning the loss of loved ones; we trust that in him, peace and love will always prevail”.

His Excellency Dr. Trevor Matheson, High Commissioner of New Zealand to Samoa arrived in Apia on Saturday 16th of March 2019 to take up his new role. During the ceremony, he acknowledged the messages of condolences, and support at this difficult time, particularly our close friends in Samoa for their strength, their support and their solidarity, at this time.

The High Commissioner continued to state, “Samoa and New Zealand are closely linked by our shared history, geography, culture, the depth of our people to people connections, and strong democratic traditions”. Dr. Matheson further acknowledged how these links, over the years, “developed into a strong bond of friendship and cooperation that we in New Zealand cherish”. He also conveyed his commitment to maintaining and enhancing the relationship between the two countries and extended the best wishes of the Government of New Zealand to Samoa for the hosting of the 2019 Pacific Games.

His Highness Tuimalealiifano Vaaletoa Sualauvi II, Head of State of Samoa stressed the uniqueness of Samoa and New Zealand’s relationship and noting the “founding principles of partnership, understanding and mutual respect, drives the strong bond of friendship and cooperation between our two countries”. He acknowledged the support of the New Zealand government through its bilateral aid programmes but also our joint efforts on issues of mutual concern in the region and in international fora. His Highness expressed his confidence in High Commissioner Matheson and wished him a successful tenure and an enjoyable posting with his family in Samoa.

Dr. Matheson is married to Nuannit Matheson. He was born in 1956 and is of Cook Islands, French Polynesian, Māori and Scottish descent. High Commissioner Matheson is a long serving diplomat for the Government of New Zealand. He holds a BSocSc (University of Waikato), MSocSc (Hons) in geography (University of Waikato) and a PhD in human geography (Australian National University – ANU). H.E. Matheson was Ambassador of New Zealand to the Republic of Indonesia (2015-2018). He was also Ambassador of New Zealand to the Republic of Italy based in Rome with non-resident cross accreditations to Albania, Bosnia and Herzegovina, Croatia, Cyprus, Greece, Macedonia FYR, Malta, Montenegro, San Marino and Serbia. In Italy he was also Permanent Representative of New Zealand to the United Nations (FAO, WFP, IFAD) and other international agencies (MFO) in Rome (2011-2014). Dr. Matheson was Ambassador of New Zealand to the Kingdom of Saudi Arabia resident in Riyadh with non-resident cross accreditations to the Gulf Cooperation Council (GCC) States of Bahrain, Kuwait, Oman, Qatar and the United Arab Emirates (2007-2010). He was also a Senior Geography High School Teacher in Rotorua in the early days of his work.

His Highness the Head of States statement – NZ High Commissioner