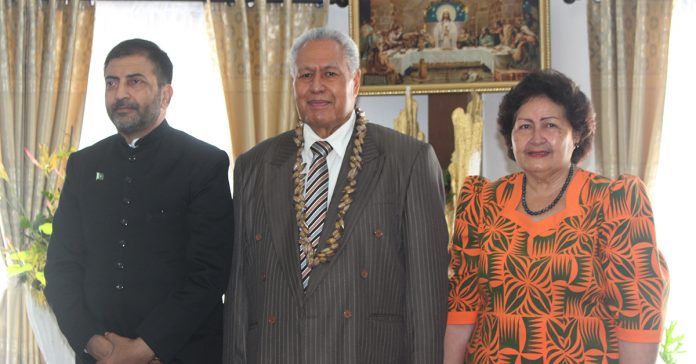 H.E. Dr Abdul Malik arrived in Apia, on Sunday 3rd of March 2019 to present his Letters of Credence to the Head of State, His Highness Tuimalealiifano Vaaletoa Sualauvi II. The credentials ceremony took place this morning at the Office of the Head of State in Vailele. He was accompanied by his wife Tahira Tufail and two daughters.

Samoa formally established diplomatic relations with Pakistan in March 1983. Samoa and Pakistan maintains cordial work relations through the United Nations, the Commonwealth, the Group of 77 (G77) and China and other multilateral fora in the pursuit of issues of common interest and aspirations in maintaining prosperity, peace and security in our respective regions and beyond.

The High Commissioner in his remarks during the ceremony reflected on the Government of Pakistan’s efforts to strengthen ties between Samoa and Pakistan through “ more political exchanges, people-to-people contact and focus on trade and economic interaction”. He stressed the importance of the appointment of their first ever-Honorary Consul to Samoa, Tiumalu Geoffrey Clarke, to support and facilitate this effort. The High Commissioner also conveyed the best wishes of the President of the Islamic Republic of Pakistan for the well-being, progress and prosperity of the people of the Independent State of Samoa.

The Head of State of Samoa, His Highness Tuimalealiifano Vaaletoa Sualauvi II in response welcomed the High Commissioner and accepted his Letter of Credence and also the Letter of Recall of his predecessor. His Highness also conveyed his best wishes for the good health of the President of the Islamic Republic of Pakistan. He welcomed the approach and possibilities for strengthening ties between the two countries as highlighted by the High Commissioner and encouraged continued collaboration on issues of mutual concern such as climate change and sustainable development. “I wish you the very best in your tenure as the High Commissioner of Pakistan to Samoa”, His Highness concluded.

High Commissioner Malik was born in 1960. He holds several degrees in Bachelor of Science, MBBS and LLB. Dr. Malik joined the Foreign Service of Pakistan in 1991 and held various diplomatic assignments in Pakistani Missions abroad, including in Buenos Aires, Prague and Wellington. Most recently, Dr. Malik served as Ambassador of Pakistan to Turkmenistan from 2015 to 2017 before taking up his current role in Wellington, New Zealand. H.E. Dr. Malik is accredited to New Zealand, Tonga, Kiribati and Samoa. He replaces the former High Commissioner H.E. Mr. Afrasiab Mehdi Hashmi, who was accredited to Samoa from October 2016 to October 2017.