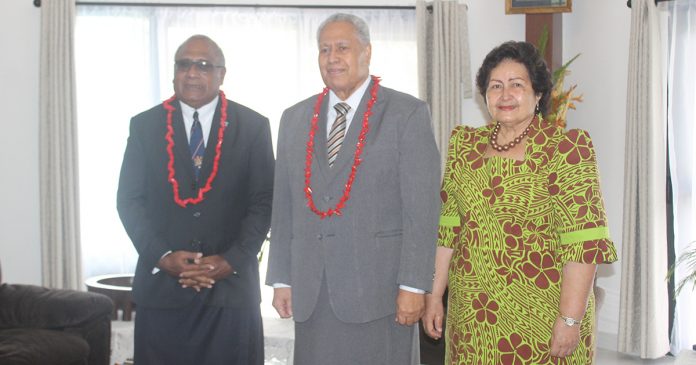 05 February 2019, Office of the Press Secretariat, Apia Samoa. H.E. Ratu Seremaia Tuianusori Cavuilati the High Commissioner of the Republic of Fiji to the Independent State of Samoa arrived in Apia on Sunday evening. On Tuesday 5th February 2019, His Excellency presented his Letters of Credence to the Head of State, His Highness Tuimalealiifano Vaaletoa Sualauvi II at the credentials ceremony held at the Office of the Head of State in Vailele.

Ambassador Cavuilati began his career in the civil service in 1976 at the Ministry of Agriculture, Fisheries and Forestry. In 1992, the Ambassador served as the Permanent Secretary for the then Ministry of Foreign Affairs and Tourism, Civil Aviation and External Trade. He was then appointed as Fiji’s Ambassador to Japan and accredited to the People’s Republic of China and the Republic of Korea from 1997 to 2001. Thereafter, he was Permanent Secretary for the Public Service Commission from 2001 to 2004. From 2004 to 2009, Ambassador Cavuilati served as Fiji’s Permanent Representative to the European Union, ACP Group and Europe-based Multilateral Institutions. From 2009 to 2011, he served as Fiji’s Roving Ambassador to the Pacific Island Countries (non-MSG) and as Fiji’s Ambassador to Jakarta and accredited to Singapore from 2011 to 2016.

Ambassador Cavuilati represented Fiji in the Rugby Sevens and Fifteen Codes from 1973 to 1977, and is married to Josivini Cavuilati with two children.

Ministry of Foreign Affairs and Trade