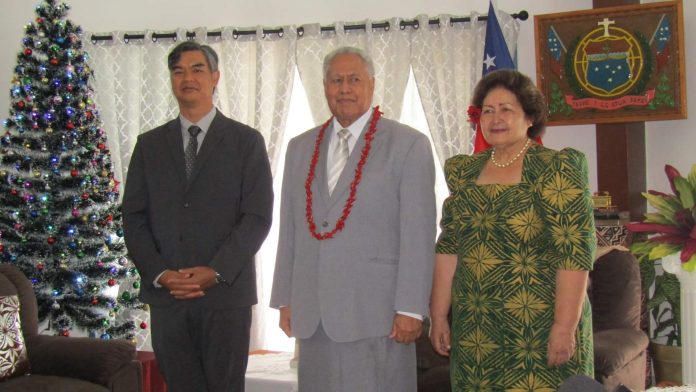 H.E. Mr. Sujiro Seam arrived in Apia last night and is here to present his Letters of Credence to the Head of State, His Highness, Tuimalealiifano Vaaletoa Sualauvi II. The credentials ceremony took place at the Official Head of State Residence at Vailele.

Ambassador Seam reflected on Samoa’s critical role in negotiating future framework for partnership and cooperation between the EU and ACP. He also shared Samoa and EU collaborative work on climate change, resilience, biodiversity, ocean, human rights and peace and security.

He commended Samoa’s accession to the Economic Partnership Agreement (EPA) with the EU in December 2018 and looks forward to the benefits on trade opportunities between Samoa and EU.

The Ambassador advices that EU will continue to lend support in building capacity for Samoan government officials and private sector in areas such as: agriculture, disaster risk reduction, violence against women, public finance management, waste management, marine protection and fisheries.

The Head of State took the opportunity to convey gratitude towards the European Union’s assistance through operations of the WHO and the Norwegian Emergency Medical team in assisting Samoa’s response to the measles epidemic.

His Highness also reflected on Samoa’s commitment to the EU through its partnership with ACP and looks forward in preparations of the Post-Cotonou signing in 2020. The Head of State also shared Samoa’s appreciation to EU for provided technical and financial assistance in areas such as agriculture, disaster risk reduction, gender based violence, public finance management, waste management, marine protection and fisheries.

Mr. Seam is a graduate of the National School of Administration in Strasbourg and Paris as well as the Institute of Political Studies and the Paris Graduate School of Management.

H.E. Mr. Seam will depart Samoa tomorrow and return to the EU Office in Suva, Fiji.