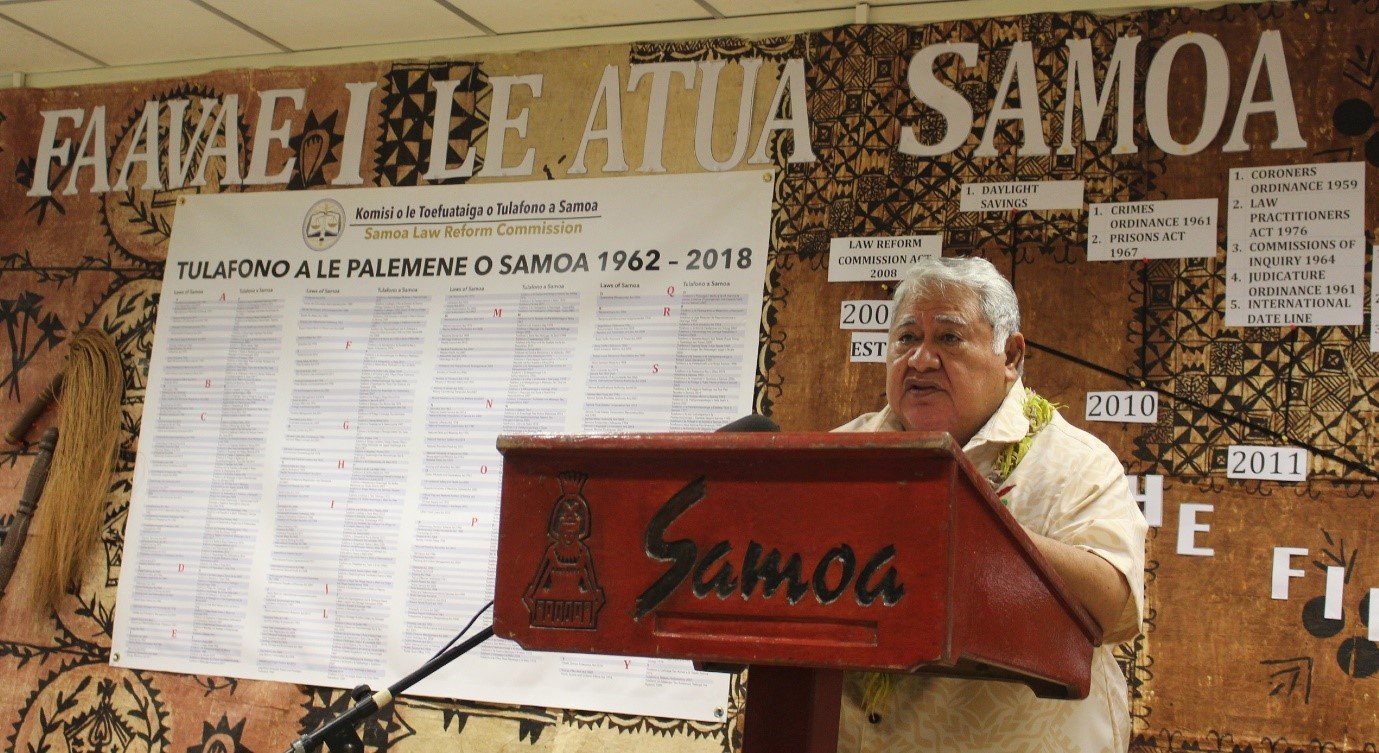 Members of the Judiciary,

Attorney General and Head of Government Ministries and Corporations,

Today, we celebrate 10 years Anniversary of service of the Samoa Law Reform Commission to our people and Government. Its establishment in October 2008 was a significant milestone for Samoa. It reflected our Government’s commitment to uphold and sustain the rule of law and the assertion of its belief that a systematic review and reform of the law, is an essential obligation of a democratic government. It is crucial that the law is fair, simple and modern whilst maintaining our strong Samoan customs and traditions.

The driving mandates of the Commission are contained in its establishing legislation, the Law Reform Act 2008, which provides that the Commission is to facilitate the review, reform and development of the laws of Samoa in order to:

This emphasis on custom and traditions reflect Samoa’s paramount duty to uphold its unique culture and local circumstances.

It took some 11 years for the Samoa Law Commission to be established. In 1997, an institutional strengthening project of the Ministry of Justice and Courts Administration identified the need for a Law Reform Commission in Samoa. The outcome of this project showed that Samoa did not have a clear established process by which a systematic review of its laws can be undertaken for the purpose of examining its relevance to the Samoan society.

Consequently, Cabinet at the time directed the formation of an Establishment Group to set up a Law Reform Commission in Samoa and make appropriate recommendations on its set up, composition, law reform process and functions. The result was the enactment of the Law Reform Commission Act 2002. For various reasons, the 2002 Act was never implemented. It was not until 2007 when the 2002 Act was re-visited and proposed revisions were made to the Commission’s functions, structure and composition, noting our limited resources, capacity and funding.

Today’s celebration reminisces about the challenges of the last 10 years, experiencing first-hand the struggle of a brand new institutional set-up based on modern (as opposed to traditional) values and principles. Nevertheless, the Commission has strived to fulfil its mandate under the 2008 Act towards law reform that promotes customs and traditions.

This anniversary also marks a significant development for the Commission- the review of the Law Reform Commission Act 2008. The Commission firmly believes that the lessons of the first 10 years can now be reviewed and developed perhaps in an updated statute guiding the Commission’s work in the next 10 years and beyond. Accordingly, the review of the Law Reform Commission Act 2008 is timely and necessary to respond to past challenges and, it is hoped and envisaged, to further meet its mandate in ensuring that the law reform projects referred to the Commission for review, and the resulting law reforms, are indeed relevant to the needs of the people of Samoa. A Discussion Paper on this review is now with Cabinet for approval.

I acknowledge the past leaderships which have paved the way towards today’s celebration:

To conclude, our laws are constantly evolving to adapt to new changes and developments. For effective law making in Samoa, law reform plays a crucial role, through its consultative law reform process, in ensuring that our laws are suitable and relevant to the needs of our people. Law reform embraces a bottom up approach upon which law making engages the wider community and government stakeholders for their views to inform any proposed changes to the law. For the Commission to move forward, we must allocate the necessary resources, time and money to improve its awareness and the process upon which law is made and reformed for the benefit of our people. In that regard, we all must continue to support the work of the Commission in the next 10 years and beyond.

It is now my pleasure to officially commemorate the Samoa Law Reform Commission’s 10th year Anniversary.