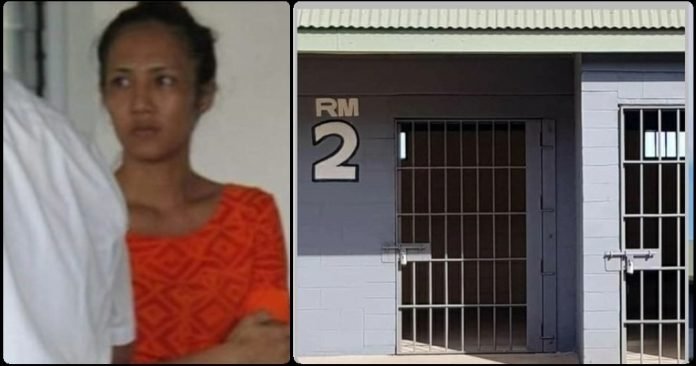 The Supreme Court has ruled that pregnancy is not an exceptional circumstance to avoid prison time for serious offenses while awaiting an appeal.

A pregnant woman convicted and sentenced to two years imprisonment for possession of narcotics and possession of utensil, has been denied bail while awaiting an appeal filed by her Defense Counsel against both her conviction and her sentence.

Ana Fuimaono was arrested alongside four men and one other woman when police found guns and narcotics in a Faatoia residence while responding to a domestic violence call on Boxing Day 2019.

Ana Fuimaono (Vaiusu), Esther Tani (Tufuiopa), AJ Roache (Lotopa), Stuart Tuitama (Faleasiu), Sanele Schuster (Alamagoto) and Pitoitua Aloese (Faatoia) were all arrested and charged when police found methamphetamine, utensils and two illegal firearms in their home. All six entered not guilty pleas, however, the trial for all six, set for October 2020 was further delayed when Pitoitua Aloese changed his plea without warning, to become a police informant.

After a defended hearing before Justice Vui Clarence Nelson, Ms Fuimaono was eventually convicted in February 2021 and sentenced to two years in April 2021.

In July 2021 an application to appeal the drug related convictions and the two-year sentence was filed Ms Fuimaono’s new defense Counsel, Unasa Iuni Sapolu. Unasa further applied to the Court that her client be let out on bail to await the appeal process.

Ms Fuimaono was represented by Afamasaga Michael Soonalole at the trial, and part of her appeal submissions before the Court alleges she was not properly defended by her previous lawyer.

Prosecutors of the AGs Office strongly opposed the application to appeal, submitting the grounds had no strength and the trial evidence was sufficient to support the conviction.

Unasa argued Ms Fuimaono’s pregnancy was an exceptional circumstance that ought to have been considered by the Court during sentencing.

Justice Tologata sympathised with the defendant currently 5-6 months pregnant, however, the Court found pregnancy to not be an exceptional circumstance for a convicted inmate to be granted bail, while awaiting an appeal against a Supreme Court decision. Justice Tafaoimalo also found the two-year sentence to be aligned with similar offences.

“The starting point is that the Court has convicted and sentenced the Appellant..

“I do not find that Justice Nelson took this particular circumstance of pregnancy into consideration in his sentencing decision. However given the severity of the offence of possession of narcotics, both marijuana and methamphetamine, as well as evidence before the Court that she was dealing in marijuana on the day in question, the length of the sentence is not excessive in my view”.

It was also established that the Court of Appeal would be sitting in October 2021.

States Justice Tologata in her ruling, “The Ministry of Justice and Courts Administration has informed me that the next sitting of the Court of Appeal is in October 2021, which is this month. The Appellant has been in prison for almost 6 months. She has a wait of a few weeks for her appeal case to be heard”.

Assistant  Commissioner Leaiataualetaua Samuelu Afamasaga outlined for the Court how pregnant inmates are dealt with in prison.

“Regulation 57(1)(b) of the Prisons and Corrections Regulations 2014 provides that prisoners may be transferred to hospital for birth”.

The Assistant Commissioner explains that the staff of Prisons are responsible for taking inmates to the hospital to give birth, adding that this is not uncommon, hence the procedures and processes in place.

He also pointed to Regulation 57(1)(p) which provides for the temporary transfer of prisoners for maternity leave.

“This means they have 3 months of maternity leave at home after giving birth, before they return back to prison”.

Justice Tologata Tafaoimalo states in her decision that many pregnant women have been sentenced to prison, and this is an unfortunate consequence of committing a serious offence for which a sentence of imprisonment is imposed.

“I have read and considered all the affidavits in support of the application. I accept that the Appellant would rather be at home given her pregnancy. Prison is not a pleasant place to be. She is about 5-6 months pregnant.

“Whilst I have much sympathy for the Appellant in her present state, her circumstances are not exceptional. Bail pending appeal is only granted in exceptional circumstances. With respect, many pregnant women have been sentenced to prison. Unfortunately this is a consequence of committing a serious offence for which a sentence of imprisonment is imposed. It is a relevant consideration that she will be able to give birth in hospital, then spend 3 months of maternity leave at home,” states Justice Tuala-Warren.

Acting Commissioner of Police and Prisons, Papalii Monalisa Tiai-Keti was asked last week about the effective implementation of the stated policies, and the number of women who had given birth in prison over the last year. A response was not received by the time of publication.

Right to a Fair Trial

Ana Fuimaono also submitted through her new lawyer Unasa Iuni Sapolu that she was not given a fair trial under Article 9 of Samoa’s Constitution because she had wanted to give evidence but alleges her lawyer Afamasaga Michael Soonalole did not allow her to.

As stated in the Court decision..

“It is submitted by the Appellant that there is the issue of whether she had a fair trial pursuant to Article 9 of the Constitution. In her affidavit dated 28 July 2021, she says that she wanted to give evidence at her trial however she says she was advised that she will be subjected to strong cross examination which she might find hard to answer:

“Afamasaga Michael Soonalole provided an affidavit in which he says that he adequately put before the Court and Prosecution witnesses the defence but was not believed by the trial judge. He also says that he explained to the Appellant the options available to her in giving or not giving evidence and she elected not to give evidence;