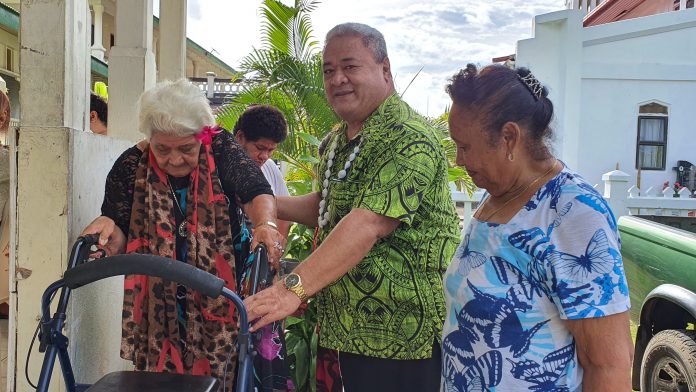 5 April 2021 Apia Samoa  Pre-polling for Samoa’s 2021 General Elections are underway with special booths set up across Upolu and Savaii for all those eligible and had registered to cast their votes before the official polling date of 9th April 2021.

Thousands of Samoa’s elderly and a ‘carer’ also allowed under the law, were seen casting their votes on the first day of pre-polling which extends to Thursday 8th April.

For registered pre-pollers of Vaimauga 2, early voting started right on 9am at the EFKS Hall in Motaa, with the Village Representative (Sui o le Nuu) Savae Ali Wilson, seen helping the elderly out of their cars and keeping a general eye on things.

“It is important for Samoa to conduct a peaceful election. Our role during these elections is to ensure voters are not coerced or influenced in any way,” he tells Samoa Global News.

“There should be no signage here, or any committee members, or anyone else trying to influence the voters,” he said.

Savae says they are also looking out for any groups who may be congregated near the polling booths, to ensure they are not there to pressure any voters.

“Even the body language of those who may be sitting idly nearby could send signals to pressure voters, so we are here to ensure an environment that allows voters to freely cast their votes without pressure or fear; especially our elderly and their carers voting today,” says the Moataa Village Rep.

The atmosphere was calm, with the elderly making their own way to voting booths, accompanied by carers and driven by their own children. Quite a different environment to previous elections where candidate committees would collect voters from their homes and transport them to voting booths. Transporting voters to polling booths is a now practice now prohibited under the law. There was instead, a notable use of taxis seen taking voters this morning.

Also notably missing this general election was the absence of foodstalls nearby. In previous elections, it was a generally accepted practice for candidate committees to give out plates of food costed at less than $10 tala, from stations 100 metres away.

With all of that now prohibited under the law, Savae observes that Samoa is finally moving towards free and fair elections, where voters can truly vote without influence – even from body language at a distance, he says.

A public notice listing the various constituencies and their prepolling booths for each day, has been issued by the Office of the Electoral Commissioner and can be seen by clicking here.

For pre-pollers registered for constituencies in Savaii, they can cast their votes this week at Tuanaimato, Gym 2.

Elderly who are registered to vote in Upolu however, must pre-poll at voting booths set up within constituency for which they are on the electoral roll.