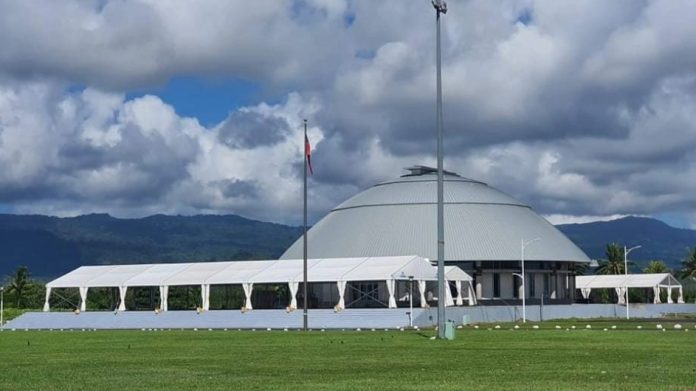 The authority and powers of the Head of State of Samoa to call the Legislative Assembly following a general election was one of the issues argued before the Court of Appeal on Friday.

Chief Justice Satiu Simativa Perese presided as President of Samoa’s Court of Appeal, together with Justice Niava Mata Tuatagaloa and Justice Tafaoimalo Tologata Leilani Tuala-Warren. It was an all day hearing that began at 9am and went to 5pm with Counsels of two parties and two joined intervenors speaking to their comprehensive written submissions.

The decision being appealed is a Supreme Court judgment of 28 June 2021 that declared a tent swearing-in of elected FAST members unconstitutional and unlawful because the Head of State was not present. The Attorney General is however seeking to set aside “necessary additional orders” set down by the Supreme Court directing the AG to advise all responsible parties to convene Parliament within 7 days. Further to that the Supreme Court stated that if there was a failure to convene Parliament this “would justify the Court revisiting the issue of
necessity and whether the doctrine now requires to be invoked in the Respondents’ favour and declare that the swearing in of 24 May is valid”.

The Fa’atuatua i le Atua Samoa ua Tasi party through their lawyer Benjamin Keith zooming in from Wellington, filed a counter appeal and in Court argued that the actions of the elected FAST members on 24 May 2021 were mandatory under Article 52 that requires the Legislative Assembly to meet within 45 days. FAST submitted that Article 52 further requires the election of a Speaker for Parliament, the swearing-in of elected MPs and the appointment of a Prime Minister and Cabinet, and that these necessary actions after a general election could not be lawfully prevented by the absence of the Head of State.

“That is the nature of the AG’s involvement is to act as Government and that’s nothing inconsistent,” Rishworth told the Court.

Rishworth further submitted the additional orders handed down by the Supreme Court were unfair, and the Proclamation made by the Head of State on the 20th of May for Parliament to convene is expired and therefore invalid. He argued that the Court does not have the authority to call the convening of Parliament.

Mr Keith in his cross appeal said the Head of State had directed, by his Proclamation of 20 May 2021, that the first session of the 17th Parliament of Samoa be held on the 24th of May, which is the last date permissible under article 52 of the Constitution.

He continued by saying the subsequent proclamation dated 22 May seeking to
“suspend” that sitting, was set aside by the Supreme Court in its judgment on the 23rd of May.

“That suspension was not appealed”, reminded Mr Keith.

The FAST Party also argued through Mr Keith that as a responsible government, the Assembly shall meet no later than 45 days after each general election.

Mr Keith was asked by the bench about Article 56 of Samoa’s Constitution that states the Legislative Assembly not be disqualified from transacting business for reason of any vacancy among the members of Parliament.

The Samoa Law Society through Robert Lithgow QC from Wellington, New Zealand emphasized the role of the Supreme Court as the body that interprets the Constitution and reminds that Court decisions are law.

“In this context, the rule of law means electoral processes and the recognition and acceptance of the decisions of the Supreme Court unless and until overturned or modified on appeal”.

The SLS reminded that Samoa’s Constitution provides for a Government and Legislature under the Westminster System.

“In this case, entirely consistent with the Constitution, the Christian principles recognised therein, and the customs of Samoa there shall be a Parliament made up of the elected representatives of geographical districts who shall be entitled to justify and recognise their election and to create a legislative assembly”.

“The mechanism provided by the Constitution is for the elected representatives to meet at a time and place. The time must be within 45 days of the election and the place is by proclamation of the Head of State”.

The Law Society also supported  the central proposition that elected representatives must meet, elect a Speaker, and be sworn-in so that a government can be formed.

“..whatever has happened to date, to frustrate elected members meeting and forming a legislative assembly, must be brought to an end as a matter of urgency and that this Honorable Court, with the power vested in them, has the authority to order that be so”.

SLS observer that it has never been a requirement of the Constitution that all disputes related to elections are
resolved prior to calling the elected members together nor is it a requirement that the
legislative assembly not commence without the women’s representation proportion being
settled.

“In his Proclamation of 4 July 2021, the Head of State proposes that a properly
constituted legislative assembly must consist of 52 members and a meeting of 51 is insufficient,” submitted SLS.

The Samoa Law Society also observed that the Attorney General, “in essence attempted to, perhaps successfully, discredit the actions of the ‘tent swearing in’ but sought nothing that moved the state of Samoa towards a functioning legislative assembly and thereby functioning government.”

The Court of Appeal however earlier in the week issued an order that the Caretaker Prime Minister and his Caretaker Cabinet be served as part of these proceedings.

Mr Lithgow also told the Court that he did not think the interactions between Articles 44 and 52 or the 45 day period were issues to before the Court and therefore could not be argued. He said a separate hearing would be needed to deal with that issue.

The decision is reserved and Chief Justice Satiu said it would be delivered before the 2nd of August; the conditional date set by the Head of State in his last address to the nation.