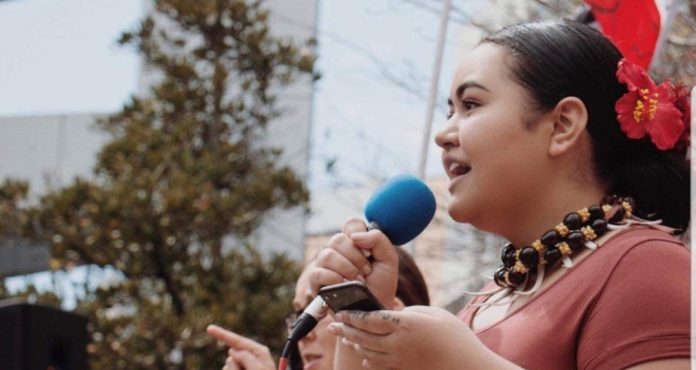 27 September 2019, Auckland New Zealand.  As tens of thousands of protesters took to the streets in a nation-wide strike across New Zealand, Pacific Climate Warriors came out in full force to deliver a firm message to world leaders and the corporate world.

“We stand united as warriors with Schools Strikes 4 Climate, fighting for a world we know that we, as young people, deserve to live in,”

“I stand here as a warrior, my voice loud and strong, because it is anchored by the voices of my brothers and sisters in the Pacific.”

“We are striking for our Islands, not against our Pacific leaders who have shown climate leadership but for them, we strike for all of us.”

Brianna Fruean represents the voices of hundreds of Pacific students from across New Zealand seen in traditional wear, mostly Samoan, singing familiar traditional songs as they marched to show the world that the Pacific will no longer tolerate mediocre action.

“We are drawing the line here! We can’t let our islands down, so we need our world leaders to rise to the occasion – faster than the seas.”

“We as Pacific young people are showing up powerfully so that world leaders know that we are watching them.”

“If world leaders won’t show true climate leadership, then we will,” continued Fruean.

“Our message to the world is, Save the Pacific, Save the World.”

Brianna spoke with a courage sending a firm message to the corporate world.

“No more corporate bullying, no more silencing our voices. No more putting profits before our future.”

Brianna has been a warrior against climate change since she was a young girl growing up in Samoa. Today the 21 year old travels the globe to raise awareness and save not just her Pacific home, but the world.

“As corny as it sounds, I really do believe this generation will change the world”.

“This is the fight of our generation!”