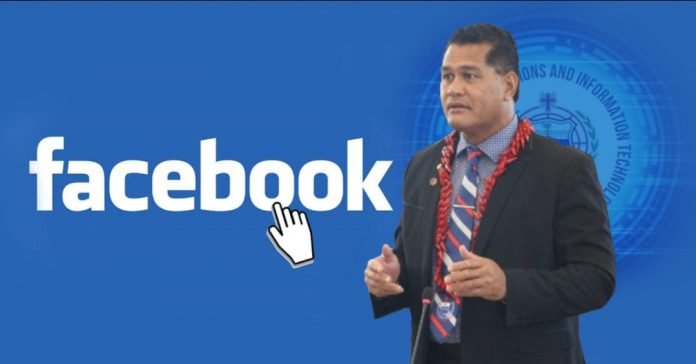 The temporary shutdown of Facebook and other social media is a possibility currently being explored by officials of the Caretaker Government, “as ways for Samoa to have a fair and peaceful election in this second round”.

That is the position confirmed by Caretaker Minister of Communication and Information Technology, Afamasaga Toeolesulusulu Lepuiai Rico Tupai who says the disrespectful language being used towards Samoa’s leaders is of concern, and setting a bad example for children and youth observing such behaviour on social media.

“The disrespectful, repulsive and obscene language towards our leaders; not only the Head of State, the Hon Prime Minister, the Honourable Fiame Naomi and all other politicians as well as the Judiciary is not only culturally inappropriate but also concerning as our children are exposed to this,” says Afamasaga. “It goes against what we teach them as right behaviour”.

The Caretaker Minister says although MCIT has an established relationship with Facebook for shutting down fake pages actively perpetrating cyber bullying, the process can still take some time..

“The majority of these posts are in the Samoan language and by the time they can be shut down, severe damage has already been done”.

Afamasaga Toeolesulusulu says the issue is no longer about freedom expression, but a matter of national security with divisions being seen in families, villages and communities.

“It’s unfortunate as both (political) parties have set up dynamic and very creative promotions on Facebook, but this is no longer freedom of speech but irresponsible expression of opinion causing harm to others..”

Afamasaga adds the amount of fake news, curated truths and slander being published and broadcast over Facebook recently has had a lot of negative influence on voters.

Samoa is still in limbo as to whether there would even be a 21st May 2021 general election, since the legality of the writ handed down by the Head of State is being challenged before the Supreme Court of Samoa.

Chief Justice Satiu Simativa Perese has set a hearing to start as a matter of urgency on Thursday 13th May 2021 at 10am.

“The reason I am going to direct the hearing for next Thursday is because, if the power has been properly exercised, then the second election needs to go on..;

“But if the Court finds that there is no basis for the second election, then the country needs to be advised and electors need to be advised, as a matter of priority”, explained the Chief Justice Satiu.

According to an Internet Users by Population report for Oceania, Samoa had 134,500 registered Facebook users as at December 2020, equating to 67% of its 200,149 population.