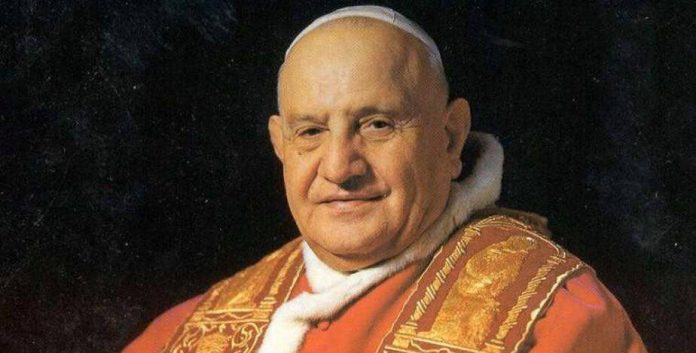 Pope John XXIII  was head of the Catholic Church and sovereign of the Vatican City State from 28 October 1958 until his death in 1963. Pope John XXIII passed away when he was 81. He was the eldest son of Giovanni Battista Roncalli and Marianna Giulia Mazzolla. His birth name was Angelo Giuseppe Roncalli and is the fourth in a family of 13.

He was ordained to the priesthood on 10 August 1904 and served in a number of posts, as nuncio in France and a delegate to Bulgaria, Greece and Turkey. In a consistory on 12 January 1953 Pope Pius XII made Roncalli a cardinal as the Cardinal-Priest of Santa Prisca in addition to naming him as the Patriarch of Venice.

Roncalli was unexpectedly elected pope on 28 October 1958 at age 76 after 11 ballots. Pope John XXIII surprised those who expected him to be a caretaker pope by calling the historic Second Vatican Council (1962–1965), the first session opening on 11 October 1962.

He was elected pope at 4:30 pm with a total of 38 votes.  They wished to choose a candidate who would do little during the new pontificate. Upon his election, Cardinal Eugene Tisserant asked him the ritual questions of whether he would accept and if so, what name he would take for himself.

Roncalli gave the first of his many surprises when he chose “John” as his regnal name. Roncalli’s exact words were “I will be called John”. This was the first time in over 500 years that this name had been chosen; previous popes had avoided its use since the time of the antipope John XXIII during the Western Schism several centuries before.

John XXIII today is affectionately known as the “Good Pope”

On 23 September 1962, Pope John XXIII was diagnosed with stomach cancer. The diagnosis, which was kept from the public, followed nearly eight months of occasional stomach hemorrhages, and reduced the pontiff’s appearances. Looking pale and drawn during these events, he gave a hint to his ultimate fate in April 1963, when he said to visitors, “That which happens to all men perhaps will happen soon to the Pope who speaks to you today.”

Pope John XXIII offered to mediate between US President John F. Kennedy and Nikita Khrushchev during the Cuban Missile Crisis in October 1962. Both men applauded the pope for his deep commitment to peace

John XXIII made many passionate speeches during his pontificate. His views on equality were summed up in his statement, “We were all made in God’s image, and thus, we are all Godly alike.”

He made a major impact on the Catholic Church, opening it up to dramatic unexpected changes promulgated at the Vatican Council and by his own dealings with other churches and nations.

In Italian politics, he prohibited bishops from interfering with local elections, and he helped the Christian Democratic Party to cooperate with the socialists. In international affairs, his “Ostpolitik” engaged in dialogue with the communist countries of Eastern Europe.

His overall goal was to modernize the Church by emphasizing its pastoral role , and its necessary involvement with affairs of state. He dropped the traditional rule of 70 cardinals, increasing the size to 85.

He used the opportunity to name the first cardinals from Africa, Japan, and the Philippines. In doctrinal matters, he was a traditionalist, but he ended the practice of automatically formulating social and political policies on the basis of old theological propositions.

He did not live to see the Vatican Council to completion. His cause for canonization was opened on 18 November 1965 by his successor, Pope Paul VI , who declared him a servant of God.

On 5 July 2013, Pope Francis – bypassing the traditionally required second miracle – declared John XXIII a saint based on his virtuous, model lifestyle, and because of the good which had come from his having opened the Second Vatican Council. He was canonized alongside Pope John Paul II on 27 April 2014.