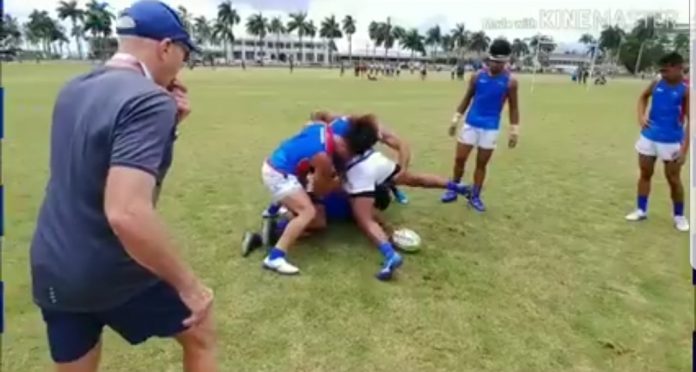 Australia have qualified for the Olympics after beating Samoa 19-12 in a close encounter at the ANZ Stadium in Suva, Fiji.

Australia won their own kick-off before running into a high tackle by Losi Filipo that put Samoa down by one player.

After Filipos yellow card, Laaloi Leilua put in a textbook Samoan hit which forced an Australian error.  Now with the ball in hand, a disciplined Samoan attack saw Tofatuimoana Solia power his way over for the first try.

With 7 players back on the field, Australia looked to even up the score. However Samoa’s defence stayed rock solid.

Samoa turned their defence into attack when Joe Perez executed a successful counter ruck to win the ball. Easy hands to the right hand side saw Elisepeta Alofipo give Samoa a 12-0 lead heading into halftime.

Australia came back to score first in the second half. The boys in blue showed heart in defence however Australia put together a disciplined  7+ phases that proved too much for Samoa. Australia stayed in the match trailing by 12-7.

Losi Filipo received a second yellow card for a neck roll and Samoa went down to 6 men for the remainder of the game with two yellow cards automatically translating to a red.

Australia maintained momentum and tied the game at 12-12 with 3 minutes to go.

The match remained a draw until the final 30 seconds when Australia scored a try off an error of judgement by Samoa.

Off the scrum Joe Perez went to kick the ball for a Johnny Vaili chase. A charge down led to a stroll under the post, Australia breaking the hearts of the boys in blue who were on route to the Olympics had they beaten Australia today.

The Sir Gordon Tietchens coached side now needs to win a repechage tournament later in 2020 to be able to qualify for the Tokyo Olympics. The details of the repechage have yet to be announced by World Rugby.