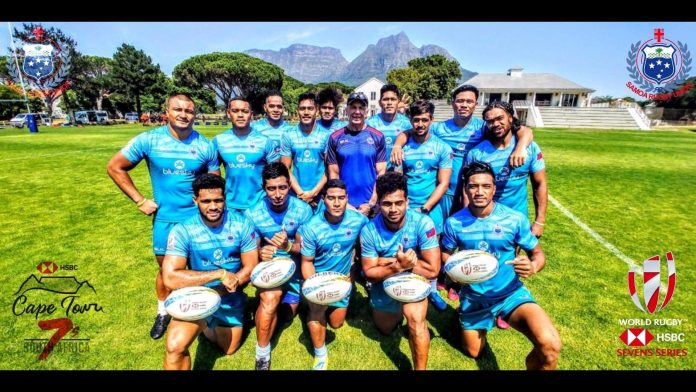 The Kenyans took full advantage and punished Samoa with a try in the right corner of the field.

Samoa finally got their hands on the ball and wasted no time in closing the gap. Joe Perez took off from set piece and found himself under the posts to make it 10-7.

As time expired in the first half Samoa was again put under pressure with their poor tackling technique. Kenya sliced through a scrambling Samoan defence to extend their lead to 17-7 at halftime.

Samoa started the second half with two brain explosions that lead to yellow cards each for Belgium Tuatagaloa and Paul Scanlan.

Paul Scanlan knowing he was offside illegally batted the ball away during a Kenyan attack. At the same time, Belgium Tuatagaloa tackled a Kenyan player who had clearly off-loaded the ball away. A historical single play of rugby that led to two players being sent off.

Playing with a 7 on 5 advantage, Kenya made no mistake in punishing Samoa’s poor discipline to extend their lead 24-7.

With 7 back on the field, Samoa scored under the post through Belgium Tuatagaloa closing the lead to 10 points.

Traling with time left on the clock, Samoa frustrated their fans when they took their time to get the kick-off away.

Samoa ends the first match of the tournament with a 5-point deficit. Kenya 24 – Samoa 19.

Vs Ireland 11:19pm Sat night
Vs Australia 5:09am Sun morning