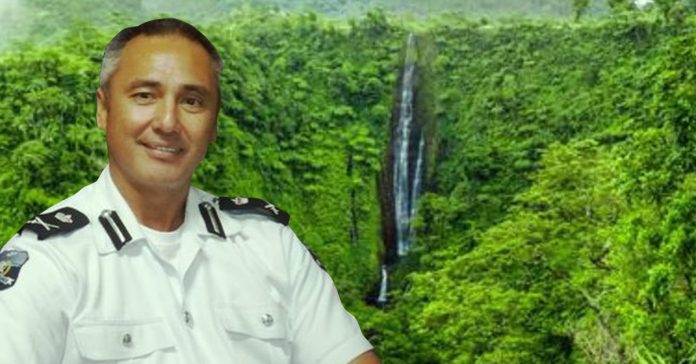 10 April 2019, Apia Samoa. The search by Samoa Police and Fire & Emergency Services Authority of a victim who was feared had fallen over the cliffs at Tiavi Falls, has been called off.

Police Commissioner Sua Egon Keil confirms that the driver of a vehicle reported to have sped off after a woman was heard screaming at the Tiavi falls lookout, had been located by Police.

“It appears to be a domestic violence incident at the location and they had both left together after the incident;

“There was no victim off the cliff.”

Last night Samoa Police and the Fire and Emergency Services responded to an eye witness who reported that he had heard a woman screaming at the Tiavi falls followed by a white sedan speeding off.

The witness had told Police that he did not see the lady in the car when it left, and was therefore concerned that she may have been thrown or pushed over the steep cliffs.

Police and FESA in following through with the witness report, conducted a search of the area for hours last night, as other officers searched for the owners of a vehicle, described by the witness as  white sedan. The witness had also noted the vehicle’s number plate.

This morning, Police Commissioner Sua Egon Keil said that their focus had been the safety of the female victim.

“After searching certain areas of
Upolu last night until this morning, we located the suspect vehicle, which is a white Toyota sedan;

“We are most concerned with the safety of the female victim, so getting information to confirm or dispel the reports received is critical at this point,” said Sua.

This evening the Police Commissioner confirmed that the incident was an incident of Domestic Violence, and that the couple had left together from the Tiavi falls.

“It appears to be a domestic violence incident at the location and they both left together after the incident;

Commissioner Sua Egon Keil says that the public should not be discouraged to report incidents that appear to be of a criminal nature impacting the safety of others.

“We applaud the young man who came forward because he believed someone was in danger,” said Sua.

The Samoa Police are now following up on the incident as a Domestic Violence case.

If you or anyone that you know is a victim of Domestic Violence, please contact Samoa Police on Ph- 22222.