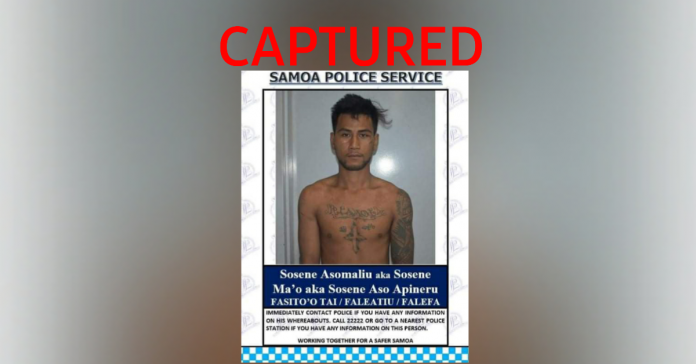 Sosene (Sene) Asomaliu who had slipped through police yesterday has been captured.

A source from Fasitoo-Tai told Samoa Global News that the wife of Iolamo (Lamo) Sanele Mo’a turned Sene in, by taking him to the home of the Nazarene pastor in Fasitoo-Tai. 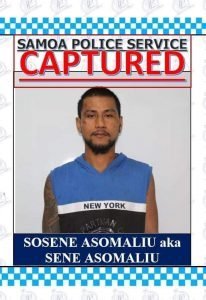 Asked, the Police Commissioner confirmed that Sene was surrendered and apprehended with the support of villagers, the Clergy and Alii ma Faipule.

In a press release the Samoa Police Service say, “Sosene Asomaliu was apprehended last night from Faleatiu and is now in police custody”.

Sua had said at the time, “Uniformed officers from the Tuanaimato depot were investigating a robbery, where the victim was pistol-wipped and his money and personal properties forcefully taken”.

“These are the guys suspected of that aggravated robbery”.

In a press release, “SPS acknowledges the tremendous efforts of Fasitoo-tai Pulenuu and Village Council as a result of his apprehension. After weeks of running havoc in these villages, the Village Council has stepped in and collectively and apprehended this individual”.

“We also acknowledge the village of Faleatiu village that assisted police yesterday with the apprehension of both Iolamo and his brother Fotu.

“This is what makes Samoa unique”.