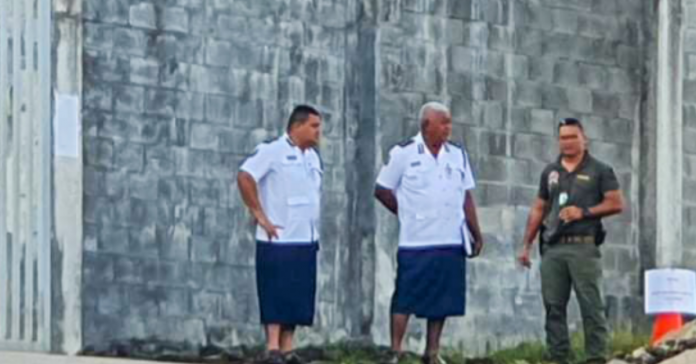 The Samoa Police Service found several illegal goods and smuggled materials that could potentiallly be used as weapons, during a sweep of Tanumalala prison today.

Police Commissioner Su’a Fuiavailiili Egon Keil said the operation involved over 80 police officers including menbers of the Tactical Operations Squad (TOS), in response to a brawl that broke out between prisoners earlier this week.

“Since a sharp object was used, we conducted a full sweep of all housing blocks;

“As we anticipated, numerous contraband were found”.

The Samoa Police said the in-house fight landed four prisoners at the Motootua hospital for treatment.

“Out of the four injured prisoners who were transported to the National Hospital for treatment, only one still remains at the hospital due to a serious eye injury”, said Su’a.

Over 30 prisoners had escaped Tanumalala, after they had attacked prison guards and destroyed property. The Samoa Police Service have since caught and returned every single escaped prisoner to Tanumalala.

At the time Commissioner Keil listed the weapons found on prisoners, adding that reforms were urgently needed at Tanumalala.

“As you can see o kolopa, o gaifi, samala, o paipa…there were cell phones found on some prisoners, and who knows what else is in there, so there is a lot of reform that needs to happen over at that prison”, Su’a had said.

Today Commissioner Keil says that it was evident from today’s sweep and from the contraband found and confiscated that an increase in trained prison personnel is needed.

“It takes a high number of trained and disciplined personnel to safely control a group of 50
or more prisoners housed in a block;

“This can be remedied by decreasing the size of a holding block and reducing the number of personers in each block”.

The Police Commissioner said more cameras needed to be fitted and strategically mounted to cover the high risk areas of the prison.

Su’a Fuiavailiili also said there was a need to improve the quality of life within the prison.

“We hope to provide better food and learning skills to assist with community assimilation;

“Fruit trees, taro, vegetables plantations will be initiated as well as poultry, cattle, pig stocks, and so forth so they can be self sufficient with less reliant on government funding.”

“Cleaning of public groups and community work assistance will now also be explored”.

Su’a says these are only some of the many reforms that can be expected to be implemented in the coming weeks.

The Police Commissioner has had to take back the leadership and management of the Samoa Prisons and Corrections following a string of controversial incidences and prison breaks in the past two years.

Within days of the take-over, Commissioner Keil requested the removal of Assistant Chief Executive Officer Maiava Viiga Fuimaono, as well as a few others who played a part in the failures of the old regime.