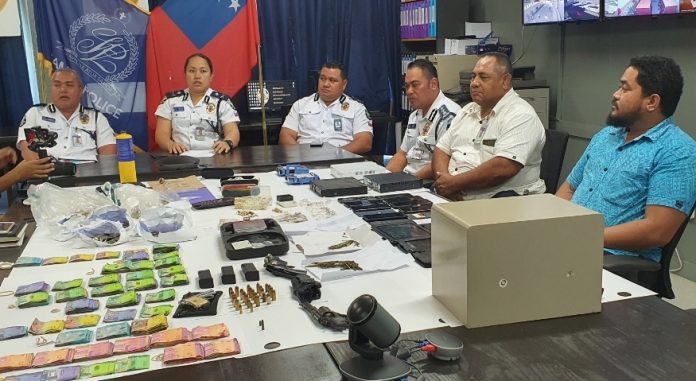 28 July 2021 Apia Samoa. A case of reported domestic violence led to a police investigation that resulted in a police raid at Vaitele on Tuesday night that confiscated $23,300 cash, methamphetamine,  handguns, ammunition, and electronic devices.

Papalii said that cash was discovered together with 3.3 grams of methamphetamine, as well as a revolver and a 22mm hand gun.

As has been the practice by Samoa Police since Commissioner Keil took over the department, a transparent display of what was confiscated was set out for the media.

Ammunition, utensils for methamphetamine, marijuana leaves, jewelry and a number of electronic devices such as iPads and cell phones. There was even a vault-type safe locked by combination.

“We are now looking at some of the burglary cases that have been reported to see if there are links to this particular drug operation,” Papalii said.

Nine suspects have been charged with possession of narcotics including a deportee.

The deportee is believed to be allegedly involved in the selling of drugs.

Responding to questions from Samoa Global News, Deputy Police Commissioner Auapa’au Logoitino Filipo said the house at Vaitele-Uta was fully equipped with surveillance cameras, not only inside but also outside.

“Those cameras will provide more evidence of what would have been going on inside this house,” Auapa’au stated.

The suspects are in custody, expected to appear in the Supreme Court next month for mention.