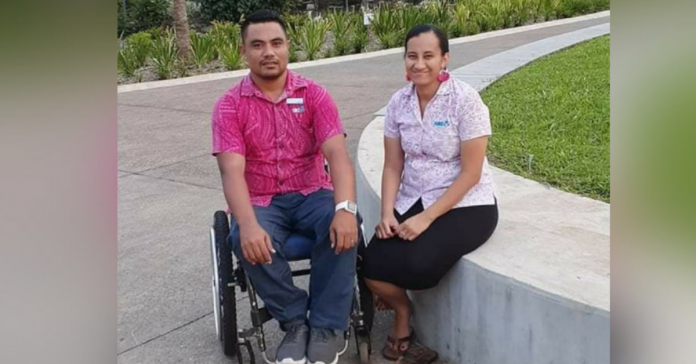 A wave of support on social media has been shown for Mr Vern Lusiano, a man with a disability who was verbally abused by a traffic officer during a routine roadblock at Malie Friday morning.

In a facebook post entitled, ❌PLEASE STOP DISCRIMINATION❌- Vern Lusiano expresses his disappointment with the way he was treated and spoken to by a police officer who stopped his car and asked him to step out.

Vern’s post has gone viral amongst Samoans with over 1.5k shares, almost 2k comments and liked over 6k times.

Vern explains that the male officer walked up to him and asked him to step outside. When the police officer realised that Vern was a man with a disability, he called him a “pipili” and started to rave about the fact that LTA had even issued him with a driver’s license.

“He asked for my license, I handed it over.. and then I felt so bad when he held up my license and called out to the other female officer, “I can’t believe LTA were even able to issue this license!”.

Vern asked the officer why he would say such a thing. The officer purported to state the obvious and tell Vern that he was a paraplegic (e ke pipili), and he could not walk (e le mafai ga e savali), so therefore, he should not have been issued a drivers license.

Vern says he felt embarrassed, and the discriminatory treatment by the unnamed police officer who looked to be in his 40s, brought back the heavy sadness of feelings he had to deal with when he had first lost the use of his legs.

“It all just came back to me..and it felt like it all just happened yesterday”.

A graduate of the NUS Faculty of Education, Vern Lusiano, now 30 was diagnosed in 2014 with a lipoma tumour in his spinal chord. He was taken for treatment in New Zealand but doctors were unable to save the use of his lower body faculties and he has since learnt to live a life confined to a wheelchair. Like so many who live with disabilities, he and his wife have a son, and they enjoy a normal life with the assistance of the right equipment and tools, and yes, he is able to drive and has a legally issued drivers license.

Vern and his wife Christine (Tine) were married in 2017 after a 6-year courtship, where Tine had stuck by his side as he had gone through the challenges of learning to live with a disability. Today Vern works as a Personal Banking Officer at ANZ Bank – a job he secured in February of 2015, just a year after his diagnosis. Vern says his employment at ANZ Bank has helped to change people’s attitudes and behaviour towards his disability. 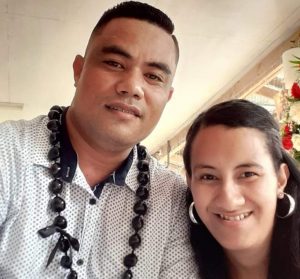 He is adored by his wife, who says, “We met 28 February 2011 and it was definitely love at first sight”.

Christine had been away on an LDS Church mission in Las Vegas when Vern was diagnosed in 2014. She returned to find him confined to his bed.

“When I came back you were hopeless just lying in bed with no interest in life. But I’m thankful beyond words to Samoa Spinal Network for their support from day one of your injury till now they never left your side. It was their amazing efforts together with our families that makes a huge difference in your life”.

Christine says the burden was made heavier by the mindsets and attitudes of people around them. The sniggering, the stares, the harsh words, even assumptions made about the genuinity of her love for Vern.

“Everywhere we go people watch and we could hear them talking about us.. most people had the wrong idea about me saying, ‘e ala a ga alu umi le maikai le la i si kama mai laga la e faigaluega le kama i le bank‘.

She says they have truly seen the discrimination and cruelty of people.

“Yes we have been through hell, but we also encounter heaven on our journey. We have our bitter and sweet moments in life. We laugh, we cry, we argue, we play, we cook, we travel, we go shopping, we drive, we go movies, why? Because you are a normal person like everyone else!”

In Vern Lusiano’s post he acknowledges the many police officers who work hard to keep Samoa safe and says he has many friends in the Samoa Police Service who have reached out to express their apologies about the unfortunate incident.

He says he did receive a phone call from a member of the Samoa Police Service on Friday and they have asked him to come in for a meeting with them on Monday, but his main goal for speaking out is to help change people’s attitudes.

Samoa is a signatory to the international Convention on the Rights of Persons with Disabilities (CRPD).

Samoa Prime Minister, Tuilaepa Sa’ilele Malielegaoi, signed on behalf of Samoa in New York during the 69th Session of the United Nations General Assembly in 2014.

Samoa issued a statement at the time to say, “The ultimate aim for facilitating Samoa’s accession to CRPD is to ensure we have an enabling environment that promotes and supports inclusive development at all levels as one of the key principles for sustainable development in line with the direction of the relevant regional and global instruments on development”.