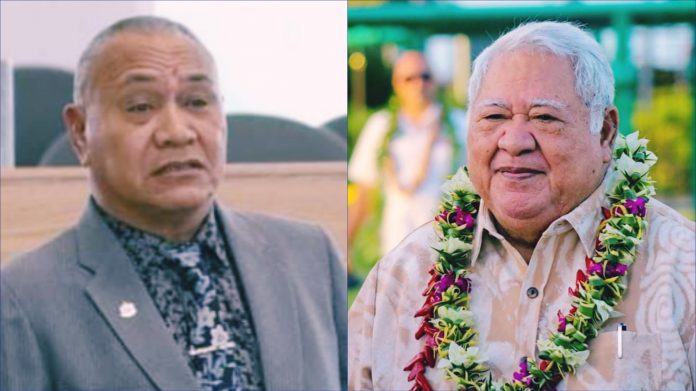 According to Deputy Police Commissioner, Papalii Monalisa Tiai-Keti, the file has been sent to the Office of the Attorney General to be reviewed.

“However, the findings of police into the allegations, is that there is enough evidence to bring charges of defamation,” said Papalii.

The Deputy Commissioner further explained that advice is sought from the Office of the Attorney General as a matter of process when complaints are made against high profile members of Government such as MPs.

Papalii says charges would be brought against the leader of the opposition under Samoa’s criminal libel laws; and heard in the District Court.

“We have handed the file to the Office of the Attorney General for their own review, and then a final decision will be made,” said Papalii.

The police investigation stems from a complaint filed by Olo after one of Tuilaepa’s press conferences, where the opposition leader spoke out against a Toyota Landcruiser which had been purchased from Australia for the exclusive use of the Minister.

Tuilaepa told the media that the act of fitting the vehicle with private plates is likened to an act of theft of public property.

Furious, the Minister took to national television to say he would sue Tuilaepa for the comments, which are defamatory and aimed to dishonour his position as a member of cabinet, as a minister, as well as his position as an MP.

Olo had added, the allegations have also impacted on his reputation and as such, impacted his wife and children.

The Minister did not deny ordering the landcruiser from Australia. He instead stressed the importance of having the appropriate vehicle, as MWTI Minister, to conduct site visits to all infrastructural developments across the country.

Olo explained that the landcruiser was first proposed to be purchased by the Samoa Airport Authority (SAA), however, approval was given to use $200k tala of underutilised MWTI funds left over from the NZ Government-funded Waterfront project for the Minister’s vehicle.

The Minister had gone on to explain that $50,000 tala was then provided by the Samoa Airport Authority, to deposit a landcruiser for his use, to be procured from a company in Australia.

Olo also took a personal approach to the Constituencies of the HRPP leader and secretary, by stating that he would not be inspecting the villages of Lepa and Vaitele, “because they don’t want to buy me a car.”

Samoa withdrew libel from its criminal code in 2013 as a media reform initiative. However, at the end of 2017, Parliament voted to revive its criminal libel law under section 117(A) of the Crimes Act 2013, despite opposition from media freedom advocates.

A person found guilty of violating this law faces a three-month prison term.

In 2019, a prominent anti-government blogger based in Australia, Malele Paulo aka King Faipopo was charged with defamation against Tuilaepa Sailele, PM of Samoa at the time. Paulo was convicted in the District Court of Samoa and sentenced to seven weeks in jail.