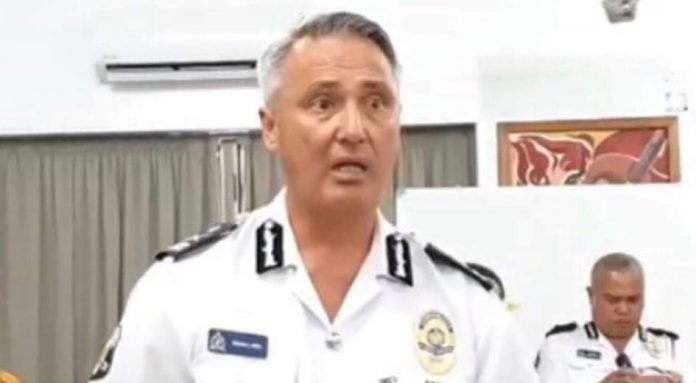 A policewoman from Fasitoo-Uta just four months on the job has been suspended in relation to a leaked mug shot of FAST MP Toeolesulusulu Cedric Schuster arrested on Independence Day for Driving Under the Influence (DUI).

Sworn in as Minister Elect for Environment and Tourism, Toeolesulusulu has since resigned as a member of Fiame’s Cabinet over the incident, saying he wants to protect the integrity of the position as he goes through the Court process.

A leaked booking photograph from a Samoa Police secure database showing the  MP shirtless, was posted on the Human Rights Protection Party Supporters facebook page the next day, and widely shared on social media.

The Commissioner says the illegal use of the Ministry’s confidential system housing sensitive information is of grave concern.

Alleged to have been politically motivated, Su’a Fuiavailiili says based on the facts and evidence gathered so far, the constable will be terminated from the Samoa Police Service.

“I will not and cannot tolerate this type of unacceptable behaviour, unbecoming of a  police officer,” said Su’a.

The Commissioner says criminal charges are likely to follow, adding the Samoa Police Service cannot be seen siding with any political party in light of Samoa’s current political crisis.

“The Ministry is taking a strong stand against this”.

The Commissioner said search warrants have been sought in relation to their continuing investigations.