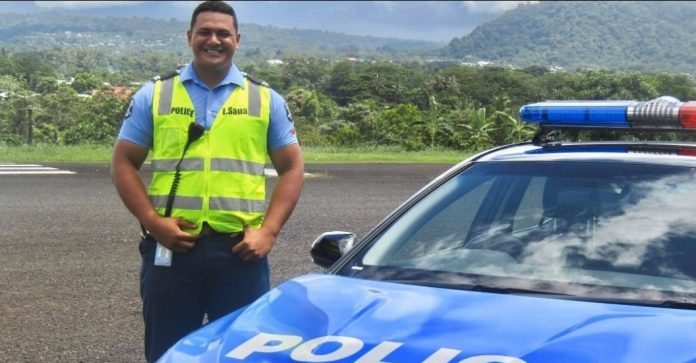 A police officer on duty during early morning traffic at the Vaimoso intersection in Apia has been called out for being an “MVP” after he came to a woman’s rescue and single-handedly pushed her broken-down vehicle away from the line-up of cars that had built up behind her.

Famous SSAB tik-toker, Marlene Mulipola, took a photo of Larrylove Saua through her rear view mirror as she stood in traffic, and posted a shout-out to the Samoa Police Service Traffic Officer, calling him the “Real MVP”.

“It wasn’t until I got close to the intersection that I saw a car had broken down, maybe three cars from the lights.”

“Then what do you know, the police officer that was monitoring traffic stopped and walked towards the vehicle. There was a woman driving, and she had her young children inside the car;

“He started to push it away from the middle of the road, and that was part of the reason for the  traffic jam, because this kind police officer was trying to remove a car that had broken down along the road..”

Marlene Mulipola says it was encouraging to see that chivalry is not dead in Samoa.

“That was very kind of him. Of all the people in vehicles in front and behind this woman’s car; it was the police officer who was monitoring traffic, that came to her rescue and pushed her car off the road. Thank you young man! ❤”

The post by Marlene Mulipola was shared widely on social media, with floods of messages praising the traffic officer for lending a helping hand.

But Constable Larrylove Saua of Saleilua, Falealili and Magiagi brushes off the act of kindness as he tells Samoa Global News, that it is all part of their work to offer assistance where they can, and help members of the community.

“I was doing what any traffic officer would have done, when someone needs assistance on the road,” he said.

A police officer for two years now, Constable Saua said it was a little disheartening for him to see and hear drivers of other cars complaining and beeping their horns when the broken-down vehicle had caused traffic to come to a stand-still.

“My message to everyone, please, if you see someone needing help, please stop and assist,” Mr Saua said.

“You never know, you may be the one needing help someday, and then your kindness will always comes back to you,” he says with a smile.

The 23 year old Constable has an older sister in General Policing, and says his passion growing up, was to become a military officer.

“Since Samoa doesn’t have a military, I shifted my dream to become a police officer,” he shares.

Towering at 6’8″ the young constable played lock for his district’s Super 9 Southern Tornadoes franchise, but says he has not been able to keep up his rugby on account of the shift-work nature of his job with the Samoa Police Service.

“My focus is on my career now. When I graduated, I was assigned here to traffic, and I want to give it my all, and work hard,” he says.