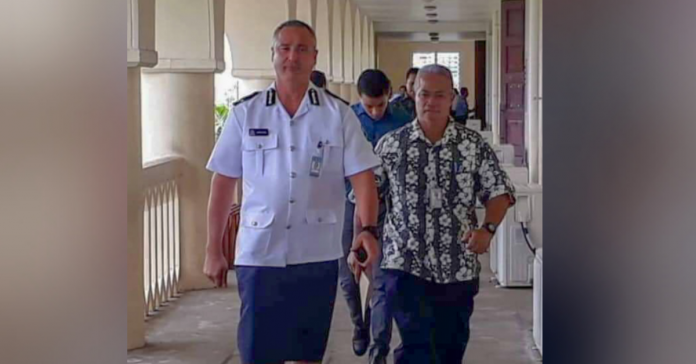 Police Commissioner Su’a Fuiavailili Egon Keil told the court that on the night of the alleged incident defendant Peter Tulaga admitted to him over a phone call that “I killed my wife, I shot her on the head and mouth”.

Su’a said he received the call at around 7:57pm on the 15th of January.

“I asked who he was and he said his name is Papalii Peter, he said he is the taro guy and that we had met before,” said Su’a.

“So I thought, okay I’m making a connection here and this is the guy I have met before through work.”

Su’a added the defendant suddenly told him that he had killed his wife and that his exact words were:

Police Commissioner said he was shocked at the time and then he asked the defendant if this was a joke and if it is, then it is not funny.

But the defendant responded to him by saying, “It’s not a joke.”

Su’a said he then instructed the defendant to hang up and call 911 so that the emergency people can respond.

“But he kept on talking and he mentioned that he had already been to Tafaigata and told the prison officer that he had killed his wife and if they can take him to custody or arrest him and put him to prison,” said Su’a.

Police Commissioner told the Court, that he was more concerned with the welfare of the victim and saying that he had gone to Tafaigata means he had already left the crime scene.

“I asked him where the victim was and he said his family took her to the hospital.

“Then I asked him where the gun was and he said his family took the gun.

The Court also heard that the defendant was scared.

“He did mention also that he was scared, he was in fear of his safety from the family of the victim that they might find him,” said Police Commissioner Keil.

He added, he then told the defendant that he will contact the Officer in charge, Superintendent Herbert Aati to assist him with his matter.

Prosecution Leone Su’a Mailo questioned the Police Commissioner if the defendant had told him anything about the incident and how it occurred.

Su’a responded that he remembered the defendant telling him that he and his wife had gotten into an argument over an alleged affair she had.

“One of the things he did mention was that he got into an argument with his wife about an affair that she had with an aunt of hers,” Su’a told the court.

Leone again asked the witness if he could recall the defendant’s last words during their conversation in connection to the incident that had happened earlier.

“Now I remember, that towards the middle or the end of the conversation he told me that he was trying to prevent her (the victim) from committing suicide,” said Su’a.

“He added, he was trying to take the firearm away from her but it went off.”

Police Commissioner Su’a told the Court that in the beginning of their conversation it was clear to him that the defendant told him that he had killed his wife, however somewhere in the middle towards the end of that conversation he changed his story.