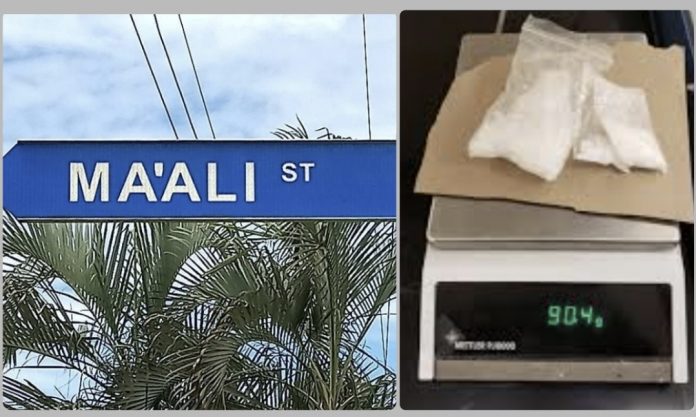 Samoa Police arrested eight suspects and confiscated 90 grams of methamphetamine, utensils and a weighing apparatus in a drug bust of a residential property in Vaitele Fou last week.

The raid of the same Maali Street residence five months ago in July resulted in six arrests including homeowners of the Vaitele Fou property on Maaali Street, Ilaita Tafili and Puleiata Moafanua.

According to Police Deputy Commissioner Auapaau, two of the eight arrests made last week were on bail from the July arrests.

“This operation brought in six men and two women between the ages of 20 to 50. We can confirm that two of them were also amongst those arrested and charged in July 2021”.

“Seven remain in Police custody while one woman has been released on bail. They’re all expected to appear in Court when the Court resumes it’s work in January 2022”.

At this very time last year, just before Chirstmas 2020, Samoa border control officers of the Customs Ministry confiscated a shipment of drugs from the US containing 500 grams of methamphetamine, hidden in cereal boxes. A similar shipment was discovered less than two months later  in February 2021 with 900 grams of meth.

The combined consignments being about 1,400 grams was estimated by Samoa Police at more than $1.4 million tala and recorded as the largest drug bust in Samoan history.