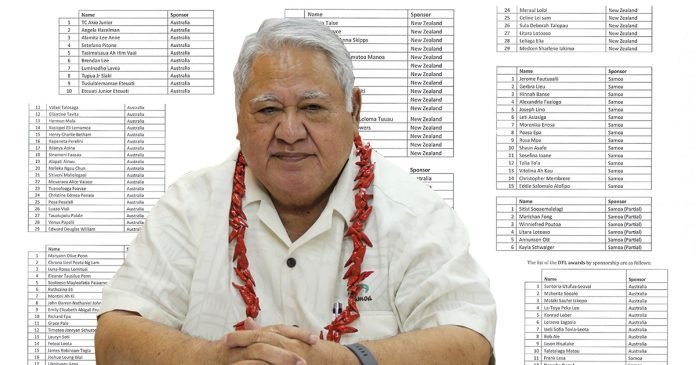 8 January 2019, Apia Samoa: Prime Minister Tuilaepa Dr Sailele Malielegaoi has urged the 127 scholarship awardees to make good use of the opportunity that they have been given.

Delivering his keynote address at a ceremony today, the PM warned against the misuse of freedom telling the students that the opportunity given to them is not for the purpose of finding husbands or wives, but a chance to sudy hard and strive for excellence.

“You will have the freedom,” he said.

“There will be no one to look over your shoulders. Your parents won’t be there to encourage you and tell you that this is what you are here for and what not.”

Tuilaepa also stressed that they would not be given any second chances if they fail.

“If you mess up this opportunity you will be sent home,” he said.

“Many of you will have an excuse such as being sick or school is hard but keep in mind we may be here in Samoa but we know everything that you are doing there. Don’t drink or smoke marijuana because once you do those things then it will be very difficult for you to stop.”

“Better safe than sorry, once you mess up then that’s it you will not get another chance,” warned the Prime Minister.

Tuilaepa told them that as the Chairman of the scholarship awards as well as the committee they do know about everything that “goes down” inside campus.

Moreover, he said the role of parents is very important in this case.

“Parents you play a very vital role in this by encouraging your kids,” he said.

“Encourage them to be strong and work hard so that they will have excellent results that will not only make them happy, make you happy but most especially churches and the government.

“Don’t call them to tell them about problems in your family, or gossip about other people because that will ruin their minds while they are away studying.

“Encourage them and give them a word from the Bible that you know will make them work hard such as the scripture from Proverbs that says “Fear of the Lord is the beginning of wisdom.”