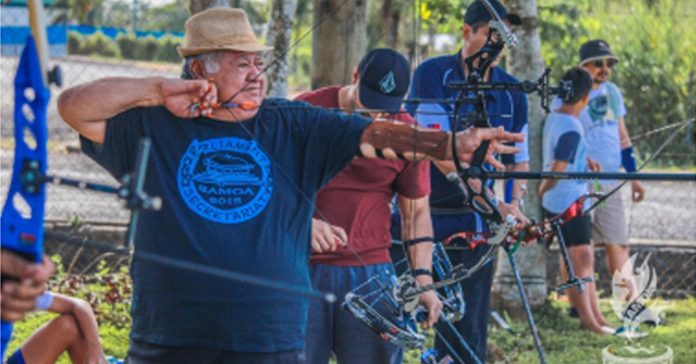 21 May 2019, Apia Samoa. The Prime Minister of Samoa Tuilaepa Sailele Malielegaoi has been selected to represent his country in archery at the XVI Pacific Games, an addition described as “very rare”.

Tuilaepa made the team after trials during the weekend, which also doubled as a test event for Samoa 2019. He represented Samoa in 2007, the last time Samoa hosted the Pacific Games, where he won a silver medal.

James Larven, the technical delegate for archery, highlighted the participation of the prime minister in representing the country.

Australia and New Zealand have been invited to participate in the Continental Qualification Tournament (CQT) for Mixed Teams. This is a qualifier for the upcoming Olympic Games in Tokyo.

Tuilaepa, speaking during Saturday’s event which coincided with the countdown of 50 days to go until the opening ceremony, said he expected a strong team come Games’ time.

“We need to practice as often as possible to improve our shooting style. We know the techniques and we need to perfect our techniques.”

He continued: “It’s the same techniques that we also used in the last Games that were held here, and we believe strongly in the principle that practice makes perfect.”

He added: “This is our first tournament to get our team in place and I would imagine that this will continue, so that by the time of the Games we should have a very good and strong team to represent Samoa.”

James said he was certain Samoa is ready to take on the Games in July.

“In many areas Samoa is ready for the Games. There is still a little that needs to be done with our event, for organisation and getting the equipment right, but other than that everything will be ready in time.”

He also described the venue for the archery competition in the Faleata Complex during the Games as “a good venue”.

“I have been here about four times, mainly in Pacific Games and also in Commonwealth Youth Games, doing a similar role. I have seen the country [become] more modern and I have seen the people strive in moving forward, but in saying that the people have stayed the same.”

Ticket information will be released in the coming weeks.