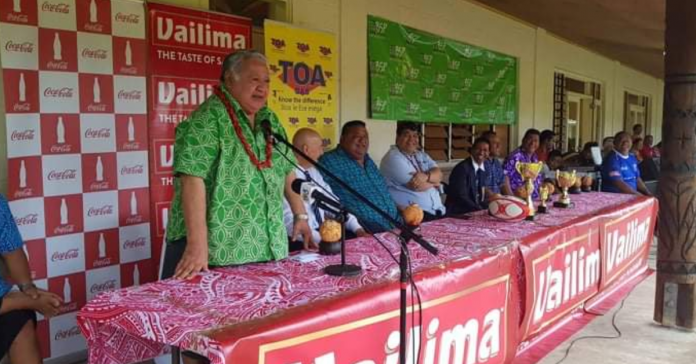 15 March 2019, Apia Samoa.  Prime Minister Tuilaepa Dr Sailele Malielegaoi delivered a message to encourage Falealili players to stay in their districts and help develop their own Unions rather than coming into town to play for the more established teams.

The Prime Minister and Chair of the Samoa Rugby Union delivered his remarks at the Poutasi rugby park  where a short ceremony was held to officiate the opening of a 2-day rugby sevens tournament ahead of the PPS Super 9 competition due to start in April.

“Falealili is a district with the saying, Ua ta fia Falealili fua – and that is because only good things come from this district and only brave people come from Falealili,” said Tuilaepa.

He reminded players of the importance of decision-making and option-taking on the field through a deeper understanding of the game rules.

“You have fitness and you have courage; now you just have to add knowledge, understanding and thinking to your game,” said the Chair of the Samoa Rugby Union.

Tuilaepa also warned players against alcohol and bad attitude, there was no room for such things in rugby.

Tuilaepa said that there was no room for excessive alcohol and bad attitude in the game of rugby.

As pool matches of Day 1 progressed, player talent was evident with speedsters, playmakers and runners with hand-in-ball all strutted their stuff in the hope to be recognised by Super 9 selectors.

Helping out at the tournament were Falealili’s Sevens stars, Tofato Solia, Murphy Paulo and Maauga I’amanu who are unable to play ahead of Sir Gordon’s Hong Kong 7s final selection.

Pool matches and finals will continue on to Day 2 today at Poutasi.