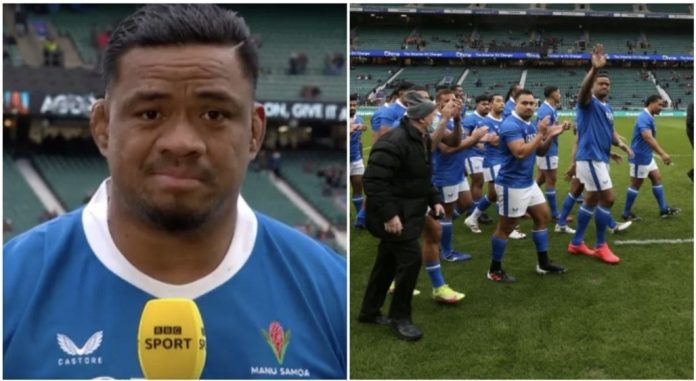 The Killik Cup match between Manu Samoa and the Barbarians set to be played in Twickenham on Saturday afternoon (Sunday morning in Apia) was cancelled 90 minutes before kick-off after a Covid outbreak in the Barbarians camp.

A statement released by the Rugby Football Union revealed that four players and two members of staff had tested positive for Covid-19.

The Barbarians had said they had 23 fit players who tested negative this morning who were willing to play, but that it was concluded on medical grounds that the game should not go ahead.

The RFU statement read: “The Professional Game Testing Oversight Group has advised that the fixture scheduled to be played against Samoa at 2.30 pm today is unable to proceed”.

“We appreciate that this is an extremely disappointing situation for the many fans due to attend, but the safety of all members of both teams is our priority.”

Joe Tekori Misses Last Chance to Play for the Manu

The match was set to be a swansong for 37 year old Manu Samoa veteran Joe who first played for Samoa back in 2007.

Speaking to the BBC at Twickenham Stadium Tekori fought back tears, speaking about how much it meant to him to play for Samoa one last time..

“For Samoa, sorry for the game today… We had an awesome week with my usos, my brothers, the Samoan side.” Tekori said.

“We were just walking inside the stadium. We already put our [kits on]. We were ready for the game and our coaches and our management came into the changing room and said, ‘Sorry boys, the game’s gotten cancelled.’

“The room went quiet. I can’t say anything. All the boys, they were waiting for me to say something because I know it’s my last game for my country and it is sad for me.

“I don’t want to end like this, but more importantly, I want all those young Samoans to know there’s a lot of potential in this Samoan team and to carry on. Manu Samoa means [a lot] to all of our country and to all Samoans around the world.

“But for me, this is my last one. I’ll finish like this, this is okay for me.”

Former Ireland full back Rob Kearney was denied a final game for the Baa Baas against an international opposition.

Kearney was set to come off the bench and play on the big stage for the final time at Twickenham, having made his professional debut for Leinster 16 years ago, but it wasn’t to be.

Several of the Samoan players were visibly gutted that the game didn’t go ahead, as they took to the pitch to sing their national anthem and perform the Siva Tau in full kit before the women’s match between South Africa and the Barbarians kicked off.