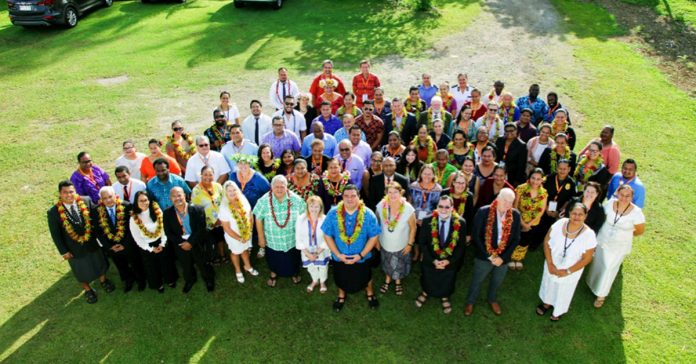 Tuesday 26 March Apia Samoa. The Office of the Attorney General of Samoa is hosting a workshop for the Pacific Islands Law Officers Network (PILON) themed, “Quality Evidence without Re-Victimisation” to discuss ways to promote Special Measures for Vulnerable Sexual and Gender Based Violence Complainants.

The Honourable Prime Minister of Samoa Tuilaepa Sailele Malielegaoi, welcomed delegates to the PILON workshop on Sexual and Gender Based Violence which has brought together members of the judiciary from across the Pacific, including NZ and Australia, as well as senior lawyers and law enforcement officials from 14 Pacific Island countries.

The Attorney General’s Office of Samoa is hosting with funding support from the Australian Government and the Pacific Community’s Regional Rights Resource Team (RRRT).

The Prime Minister of Samoa stated that Sexual and Gender Based Violence is a significant problem in Samoa and across the Pacific region.

Tuilaepa noted that domestic physical assaults can sometimes be the tip of the iceberg, with other serious crimes committed against persons in vulnerable domestic situations, including our young children.

He reinforced to delegates that the Samoan Government takes the fight against domestic violence very seriously.

“The costs of sexual and gender based violence to Pacific communities, including Samoa, are high and places enormous burdens on health, law and justice and other Government systems;

“The costs of Sexual and Gender Based Violence, which limits full participation by women and girls in social, political and economic life holds back the development of Pacific Island countries.”

Pacific leaders, including Prime Minister Tuilaepa, have acknowledged the high rates of Gender Based Violence in Samoa and across the Pacific region and have committed to eradicating SGBV and to ensuring all individuals have equal protection of the law and equal access to justice.

In 2015, the Samoan Government amended its Evidence Act to support the use of special measures in the Courtroom to support victims of sexual and gender based violence when they give evidence in Court.

The Attorney General of Samoa, Mr Lemalu Hermann Retzlaff, is the Chair of the PILON Sexual and Gender Based Violence Working Group and his office is also hosts the PILON Secretariat.

Mr Retzlaff, with the support of the Australian Attorney-General’s Department, has been instrumental in developing the workshop agenda and bringing together law and justice officials from across the region to explore best practice in supporting victims of sexual and gender based violence through the legal process and ensuring that they can give their best evidence to the Court.

In welcoming delegates, Mr Retzlaff reinforced the importance of improving processes for prosecuting this serious and prevalent crime to ensure that violent offenders are held accountable for their actions, and that victims have access to justice.

The Workshop will focus on implementation of the 2017 PILON General Principles for Obtaining the Best Evidence from Vulnerable Witnesses to SGBV, a regional document prepared by PILON for Pacific Island countries. A copy of the General Principles, which are publically available, can be found at www.pilonsec.org.

The workshop brings together judicial officers, senior lawyers, and police to ensure the law and justice system response to SGBV is coordinated and supportive for victims. The Pacific island countries participating are Fiji, Cook Islands, Federated States of Micronesia, Kiribati, Nauru, Niue, Papua New Guinea, Palau, the Republic of the Marshall Islands, Samoa, Solomon Islands, Tuvalu, Vanuatu and Tonga, together with Australia and New Zealand.